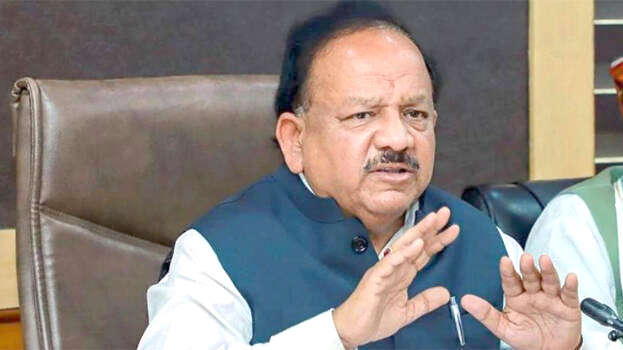 New Delhi, April 5: Union Health Minister Harsh Vardhan will on Tuesday hold a meeting with health ministers of 11 states and Union Territories, which has been witnessing a surge in coronavirus cases, to review the situation there.

These 11 states are Maharashtra, Chhattisgarh, Delhi, Gujarat, Haryana, Himachal Pradesh, Jharkhand, Karnataka, Madhya Pradesh, Punjab and Rajasthan.
According to the health ministry, Maharashtra, Chhattisgarh, Karnataka, Uttar Pradesh, Delhi, Tamil Nadu, Madhya Pradesh and Punjab have shown a steep rise in daily COVID cases, accounting for 81.90% of the over 1 lakh infections reported in a day.
Maharashtra has reported the highest daily new cases at 57,074 which is 55.11% of the new cases reported nationwide. It is followed by Chhattisgarh with 5,250 cases and Karnataka reported 4,553 fresh infections.
India’s total active caseload has reached 7,41,830 and comprises 5.89% of the country’s total infections. A net increase of 50,233 active cases have been recorded in a day, the data presented by the health ministry showed.
Five states — Maharashtra, Karnataka, Chhattisgarh, Kerala and Punjab — cumulatively account for 75.88% of the total active cases in the country. Maharashtra alone accounts for nearly 58.23% of the total active caseload, the ministry said.
India’s cumulative recoveries stand at 1,16,82,136 with 52,847 recoveries being registered in a span of 24 hours.
Besides, 478 deaths were reported in a day. Eight states account for 84.52% of the new deaths. Maharashtra saw a maximum of 222 casualties, followed by 51 in Punjab. (PTI)