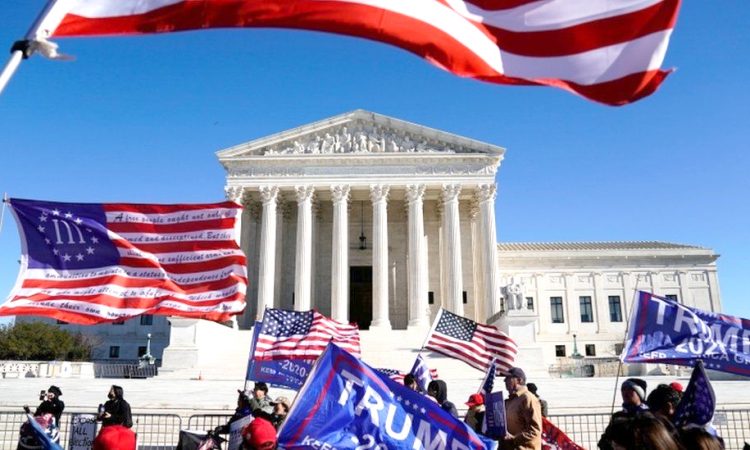 Washington, December 12: The US Supreme Court has rejected a lawsuit seeking to overturn the results of the presidential election in several key battleground states won by Joe Biden, effectively ending President Donald Trump’s bid to challenge the outcome of the November 3 polls.
The Supreme Court on Friday rejected a bid from Texas’ attorney general and backed by President Trump to block the ballots of millions of voters in battleground states of Georgia, Michigan, Pennsylvania and Wisconsin that went in favour of President-elect Biden.
Supreme Court Justices Samuel Alito and Clarence Thomas said they believed the court was required to hear the case but expressed no position on Texas’ claim. As many as 126 Republican Congressmen had also backed the lawsuit.
Texas has not demonstrated a judicially cognisable interest in the manner in which another State conducts its elections. All other pending motions are dismissed as moot, the Supreme Court said in a brief unsigned order on Thursday, delivering a devastating blow to the efforts of the Republican president to challenge and overturn the election results decisively won by Biden, a Democrat.
Biden not only bagged the most popular votes in the presidential electoral history of the United States, his tally in the electoral college was 306, more than the 270 votes required for winning the race to the White House. Trump received 232 electoral votes. The election results are scheduled to be formally certified next week by the 538-member Electoral College.
Reacting to the verdict, an angry Trump tweeted, “The Supreme Court really let us down. No Wisdom, No Courage!”
He also said the verdict was a “legal disgrace” and “an embarrassment to the USA.”
Trump and his campaign team have been making unsubstantiated allegations of massive voter fraud and electoral malpractice in the election. State election officials and mainstream media say they have not found any such evidence.
Texas Attorney General Ken Paxton in his lawsuit alleged that four battleground states — Georgia, Michigan, Pennsylvania and Wisconsin — had violated their own state laws, and thus the US Constitution. The lawsuit urged the court to bar these four states from casting their electoral votes for Biden and as such shift the selection of electors to the states’ legislatures.
Trump had said he expected to prevail in the Supreme Court.
Pennsylvania, in its response to the lawsuit, alleged that Texas wanted the justices to disregard the Constitution, not interpret it. It said Texas’ filings attempted to construct a surreal alternate reality.
Texas’ effort to get this Court to pick the next President has no basis in law or fact. The Court should not abide this seditious abuse of the judicial process, and should send a clear and unmistakable signal that such abuse must never be replicated, said the response filed by the State of Pennsylvania.
Reacting to the development, Nancy Pelosi, Speaker of the House of Representatives, said, The Court has rightly dismissed out of hand the extreme, unlawful and undemocratic GOP lawsuit to overturn the will of millions of American voters.
She said the Republican members that signed the lawsuit brought dishonour to the House of Representatives.
Instead of upholding their oath to support and defend the Constitution, they chose to subvert the Constitution and undermine public trust in our sacred democratic institutions,” the top Democrat said.
The pandemic is raging, with nearly 300,000 having died and tens of millions having lost jobs. Strong, unified action is needed to crush the virus, and Republicans must once and for all end their election subversion immediately, Pelosi said in a statement.
House Majority Leader Steny Hoyer said the Supreme Court’s decision should put an end to Trump’s attempts to overturn the results of the presidential election that he lost.
The results are clear, there was no widespread fraud, and Joe Biden is the next President of the United States, he said.
The 126 House Republicans who signed on in support of this case should be ashamed of themselves for putting their own political interests before the interests of our nation, the Constitution, and our democratic principles, Hoyer said.
Kristen Clarke, president and executive director of the Lawyers’ Committee for Civil Rights Under Law, said, this concept of one state trying to challenge the election systems of other states is fully at odds with our democratic process.
The highest court in the land rightfully put an end to a lawsuit that constituted a desperate attempt to discount ballots cast by millions of American voters. Any other outcome would have signalled the death of core principles that lie at the heart of American democracy, he said.
Clarke said, This sends a strong signal that it’s time for President Trump and his allies to shut down remaining cases clogging the courts. (PTI)