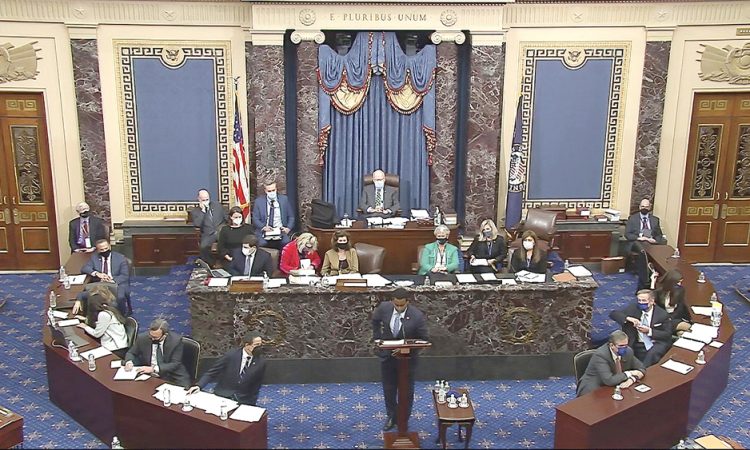 Closing arguments in the second impeachment trial of former President Donald Trump in the Senate at the U.S. Capitol in Washington, Saturday, Feb. 13, 2021.

Washington, February 14: The US Senate has acquitted Donald Trump in his second impeachment trial after falling short of the two-thirds majority needed to convict him on a charge of inciting last month’s insurrection at the Capitol, even as seven members of the former president’s party delivered a historic rebuke by joining Democrats in voting against him.

Trump, a Republican, was accused of inciting riots in the US Capitol on January 6 which left five people, including a police officer, dead.
A majority of senators – 57 to 43, including seven Republicans – voted on Saturday to convict Trump, 10 votes short of the two-thirds majority or 67 votes required for conviction.
Trump, 74, is the first-ever president to have been impeached twice and the first president to have faced impeachment after leaving office.
He was first acquitted by the Senate in February 2020 on charges that he had enlisted the Ukrainian president to try to dig up dirt on his Democratic rival Joe Biden ahead of the November 3 election.
Seven Republican senators — Bill Cassidy, Richard Burr, Mitt Romney, Susan Collins, Lisa Murkowski, Ben Sasse and Pat Toomey — voted in favour of impeaching him.
If he had been convicted, the Senate could have voted to bar him from running for office ever again.
Trump released a statement soon after the acquittal, saying “no president has ever gone through anything like it”.
“It is a sad commentary on the times that one political party in America is given a free pass to denigrate the rule of law, defame law enforcement, cheer mobs, excuse rioters, and transform justice into a tool of political vengeance, and persecute, blacklist, cancel and suppress all people and viewpoints with whom or which they disagree,” he said.
Trump denounced the trial as “the greatest witch hunt in history”.
“I always have, and always will be a champion for the unwavering rule of law, the heroes of law enforcement, and the right of Americans to peacefully and honourably debate the issues of the day without malice and hate,” he said.
He thanked his team of dedicated lawyers and others for their tireless work “upholding justice and defending the truth”.
“My deepest thanks as well to all of the United States senators and Members of Congress who stood proudly for the Constitution we all revere and for the sacred legal principles at the heart of our country,” Trump said in the statement.
He said he is looking forward to continuing his journey.
Our historic, patriotic and beautiful movement to Make America Great Again has only just begun. In the months ahead I have much to share with you, and I look forward to continuing our incredible journey together to achieve American greatness for all of our people. There has never been anything like it!”
President Joe Biden, who defeated Trump in the November 3 presidential election, said that the Senate’s acquittal of his predecessor was a reminder that democracy was “fragile” and every American had a duty to defend the truth.
This sad chapter in our history has reminded us that democracy is fragile. That it must always be defended. That we must be ever vigilant. That violence and extremism have no place in America. And that each of us has a duty and responsibility as Americans, and especially as leaders, to defend the truth and to defeat the lies, Biden, a Democrat, said in a late-night statement.
While the final vote did not lead to the conviction of Trump, the substance of the charge is not in dispute, Biden said in his first reaction after Trump’s acquittal.
Even those opposed to the conviction, like Senate Minority Leader McConnell, believe Donald Trump was guilty of a disgraceful dereliction of duty and practically and morally responsible for provoking the violence unleashed on the Capitol, Biden said.
The ruling Democratic Party ripped apart Republican senators for acquitting Trump, saying their vote to clear the former president will live as a vote of infamy in the history of the US Senate”.
January 6th will live as a day of infamy in the history of the United States of America. The failure to convict Donald Trump will live as a vote of infamy in the history of the United States Senate, Senate Majority Leader Chuck Schumer said soon after 43 of the Republican senators voted to acquit Trump.
Senate Republicans who voted not to convict Trump chose to abandon the Constitution, the country and the American people with this vote, House Speaker Nancy Pelosi said.
What we saw in that Senate today was a cowardly group of Republicans who apparently have no options because they were afraid to defend their job, respect the institution in which they serve, the senior Democratic Party leader said.
During the trial, Trump’s lawyers argued that his insurrection incitement charge was a “monstrous lie” and the impeachment proceedings against the former president was a “politically motivated witch hunt” by the Democrats.
After the vote, the senior Republican in Congress, Senator Mitch McConnell said Trump had been “responsible” for the assault on the Capitol and called it a “disgraceful, disgraceful dereliction of duty”.
However, he voted against conviction, saying it was unconstitutional now that Trump was no longer president.
McConnell warned Trump could still be held liable in court.
“He didn’t get away with anything yet. Yet. We have a criminal justice system in this country, we have civil litigation and former presidents are not immune from being [held] accountable by either one,” he said.
In their closing statements, the Democratic House of Representatives lawmakers appointed to lead the process through the Senate warned that it would be dangerous to acquit Trump.
The Washington Post said that the result of Saturday’s vote underscored Trump’s continued grip on most Republicans despite the party losing control of both the White House and Congress during his tumultuous tenure.
The outcome reflected the widespread outrage about Trump’s conduct among senators who experienced the violence of the attack firsthand, fleeing for safety as marauders overwhelmed the Capitol Police and swarmed the Capitol during the attack. It came after Democrats built a case that the former president had undertaken a months-long effort to overturn the election, and then provoked the assault on the Capitol in a last-ditch attempt to cling to power, The New York Times noted. (PTI)