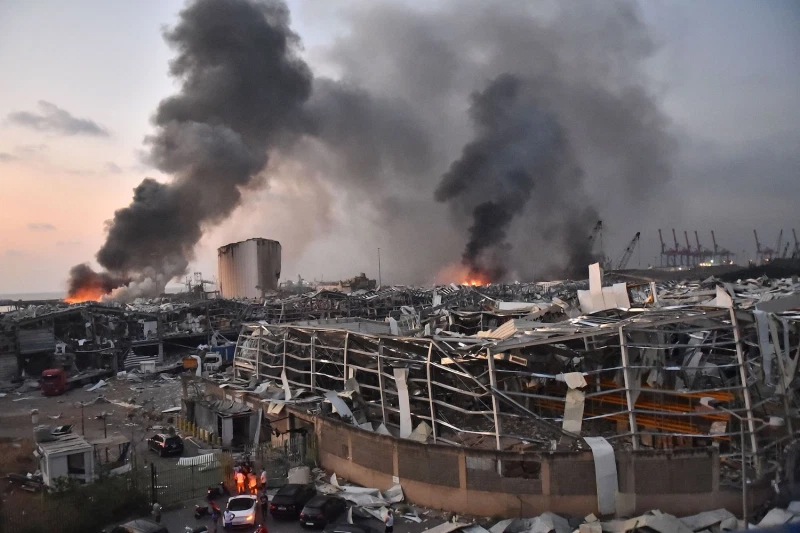 Beirut, August 5: Two U.S. officials say there are no indications that the massive explosion Tuesday evening in Lebanon’s capital was the result of an attack by either a nation state or proxy forces.
A senior Defense Department official and a member of the U.S. intelligence community told The Associated Press that, at the moment, the explosion appears to have been caused by improper storage of explosions.
Both individuals spoke Wednesday to the AP on condition of anonymity because they were not authorized to discuss intelligence briefings publicly.
The senior Defense Department official told the AP that they had no idea what President Donald Trump was referring to when he said during a press briefing at the White House on Tuesday that the explosion looks like a terrible attack.
Trump later said that his great generals told him that they felt like it was an attack.
Inquiries to the Pentagon on Tuesday about President Trump’s attack remarks were referred to the White House.
The Paris prosecutor’s office says a first assessment has established that 21 French nationals were among those injured in the Beirut port explosion.
In a statement Wednesday, the office said it is opening an unintentional injuries investigation into the blast and its causes.
The investigation will be carried out by the French National Gendarmerie, one of the country’s two national police forces.
The prosecutor’s statement said the group France Victimes is working to bring help and assistance to the French who were wounded, as well as their loved ones.
Tunisian President Ka s Saied has ordered the dispatch of two military planes loaded with medical equipment, medicine and food to Lebanon following the deadly Beirut port explosion.
A statement from the presidency Wednesday said that the Tunisian head of state gave instructions to ministers of defense Imad Hazgui and interim Social Affairs and Health Minister Mohamed Habib K’chaou, to deliver this aid urgently.
According to the statement, a team of Tunisian doctors and nurses will also be sent to Lebanon to help treat the wounded, 100 of whom will be flown back to Tunisia aboard the two planes to be treated in Tunisian hospitals.
The Tunisian president sent a note of condolence to his Lebanese counterpart Michel Aoun on Tuesday, in which he assured him of Tunisia’s support and solidarity in this ordeal. (AP)