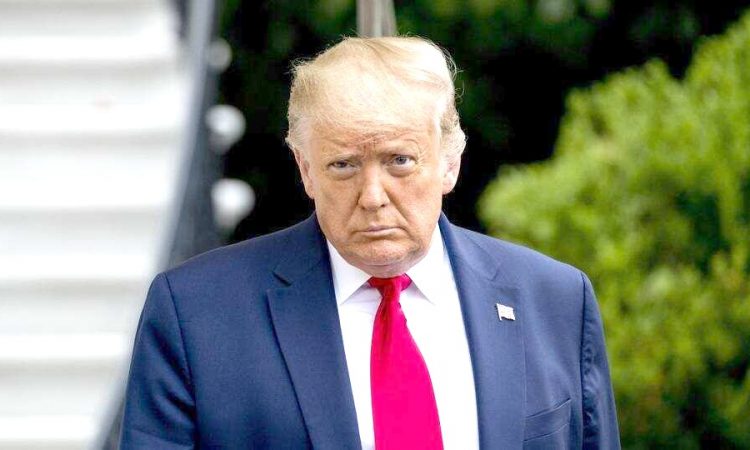 President Donald Trump walks to speak to members of the media on the South Lawn of the White House in Washington.(AP)

Washington, January 14: Donald Trump became the first president in US history to be impeached twice when 10 of his fellow Republican Congressmen joined Democrats in the House of Representatives to charge him with inciting an unprecedented insurrection at the US Capitol last week.

In a bipartisan vote, the Democratic-controlled House on Wednesday impeached Trump by 232 to 197 votes, exactly one week after pro-Trump rioters forced lawmakers to flee from the very chamber in which they cast ballots in during the fourth presidential impeachment in US history.
Ten Republicans, including the House’s No. 3 Republican, Liz Cheney, joined all Democrats to impeach 74-year-old Trump for “incitement of insurrection” for his actions on January 6, when he delivered a speech inciting his supporters to storm the US Capitol.
The violence temporarily halted the counting of Electoral College votes and resulted in the deaths of five individuals, including a police officer.
Trump will now face a trial in the Senate, where if convicted he could face being barred from ever holding office again. The Senate is adjourned till January 19, a day before the inauguration of President-elect Joe Biden as the 46th President of the United States.
All four Indian-American Democratic House members Ami Bera, Ro Khanna, Raja Krishnamoorthi and Pramila Jayapal voted in favour of the impeachment.
The House went ahead with the move after Vice President Mike Pence on Tuesday refused to invoke the 25th Amendment to remove Trump from office.
Trump will not have to quit the White House before his term ends as the Senate is out of regular session.
The House voted after several hours of impassioned debate as National Guard troops kept watch inside and outside the Capitol.
“We know that the President of the United States incited this insurrection, this armed rebellion, against our common country. He must go,” House Speaker Nancy Pelosi said, participating in the impeachment debate.
“He is a clear and present danger to the nation that we all love,” the top Democrat said.
“I believe the President must be convicted by the Senate, a constitutional remedy that will ensure that the republic will be safe from this man who is so resolutely determined to tear down the things that we hold dear and that hold us together,” she added.
The article of impeachment stated that Trump “repeatedly issued false statements asserting that the presidential election results were fraudulent and should not be accepted”.
It says he then repeated these claims and “wilfully made statements to the crowd that encouraged and foreseeably resulted in lawless action at the Capitol”, leading to the violence and loss of life.
“President Trump gravely endangered the security of the United States and its institutions of government, threatened the integrity of the democratic system, interfered with the peaceful transition of power, and imperilled a coequal branch of government.”
Reacting to the major political development, Biden expressed hope that the Senate will be able to conduct the impeachment trial of Trump while working on other critical issues.
The President-elect said that the members of the House exercised the power granted to them under the US Constitution and voted to impeach and hold the incumbent president accountable.
“It was a bipartisan vote cast by members who followed the Constitution and their conscience. The process continues to the Senate,” the Democratic Party leader said.
As the impeachment was in process in the House, Trump urged for calm as security agencies reported they had received inputs of a possible armed violence by his supporters here and across the country ahead of the inauguration of Biden.
“In light of reports of more demonstrations, I urge that there must be NO violence, NO lawbreaking and NO vandalism of any kind,” Trump said in a statement issued by the White House.
House Majority Leader Steny Hoyer said the actions of President Trump demanded an urgent and clear action by the Congress.
“He ought to be removed. And we have that opportunity to do so. Is there little time left? Yes. But it is never too late to do the right thing,” Hoyer said.
Senate Majority Leader Mitch McConnell has not yet announced the dates for the trial. In a statement, he said a trial is unlikely before Biden becomes the president of the country.
He said in a statement that a trial could not be completed ahead of Biden’s inauguration even if it started beforehand, and he wanted Congress and the executive branch to spend the next week focused on “facilitating a safe inauguration and an orderly transfer of power.”
The Democrats need 17 Republican votes to impeach Trump in the 100-member Senate. A two-thirds majority is required to convict. Democrats don’t have a majority in the Senate and it remains unclear if enough Republicans would support the impeachment of their leader.
With Wednesday’s impeachment, Trump has become the first US President to be impeached twice.
The House on December 18, 2019 approved the articles of impeachment against Trump, charging him of pressuring Ukraine to smear Biden, using nearly USD 400 million in military aid as leverage.
But the Republican-controlled Senate on February 5, 2020 acquitted him of the two charges — abuse of power and obstruction of Congress.
Besides Trump, two other former US presidents have been impeached in the past- Andrew Johnson in 1868 and Bill Clinton in 1998. However, none was convicted. (PTI)