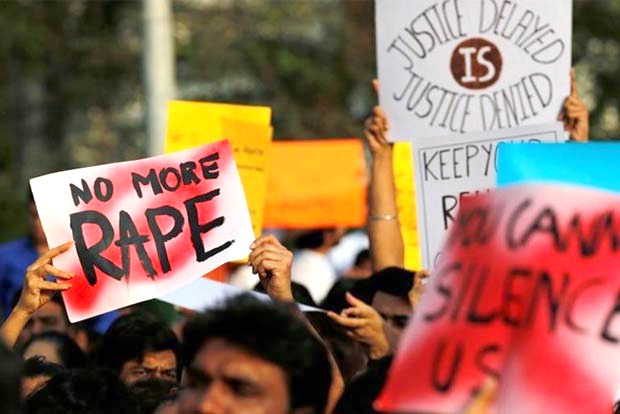 Budaun (UP), January 6: A 50-year-old anganwadi worker was gang-raped and murdered allegedly by a priest and his two accomplices in Budaun district of Uttar Pradesh, triggering an opposition’s outcry and a comparison with Delhi’s 2012 Nirbhaya case.
While the priest is on the run, his two accomplices were arrested on Tuesday night after the post-mortem report confirmed rape, police said Wednesday, adding the woman’s leg and a rib bone too were found fractured and there were injuries in her private parts.
The incident, which triggered an uproar in political circles, took place on Sunday and the matter came to light that night when the priest and his accomplices took the body to the victim’s home, saying it was found in a dry well in the temple premises.
The FIR was registered two days later after the autopsy confirmed rape and the two accomplices of the priest were nabbed, the police added.
Taking cognisance of the incident, Chief Minister Yogi Adityanath ordered “strongest possible action” in the case even as opposition parties attacked his government, terming the incident “horrific” and “shameful”, with the Congress comparing it to the Nirbhaya incident of 2012.
The National Commission for Women too took note of the incident and decided to send a team of its members to probe the incident.
About the incident, Badaun’s Senior Superintendent of Police Sankalp Sharma said, “The post-mortem report confirms rape and there are injuries in her private parts and a fracture in the leg.”
She suffered a rib fracture too, he added, citing the autopsy report.
The SSP said the station house officer (SHO) of Ughaiti police station has been suspended for “delay in informing higher authorities, laxity in taking action, dereliction of duty and failure in taking speedy action”.
“The 50-year-old woman, who had gone to a temple on Sunday, was found dead under mysterious circumstances. Family members of the woman have accused the temple mahant (priest) and his accomplices of raping and murdering her. Based on this, a case was registered against the accused. Two of the accused persons were arrested on Tuesday night while the mahant is still absconding,” he said.
Four teams have been formed to nab the priest, the SSP said.
Following the incident, Bareilly ADG Avinash Chandra too visited the crime spot and announced a reward of Rs 50,000 on the arrest of the absconding priest.
The case was registered on Tuesday after the post-mortem report came.
“Based on complaints of the family members and the post-mortem report, a case has been registered under section 376D (gang-rape) and 302 (punishment for murder) of IPC,” the SSP said.
He said a second opinion on the post-mortem report is being sought from medical experts and only after that, any conclusion can be reached.
Asked if the incident resembles the 2012 horrific Nirbhaya gang-rape case, the SSP said, “It will be wrong to link this incident to any previous incident. Let’s wait for the medical examination report.”
Budaun chief medical officer, Dr Yashpal Singh said the woman died of trauma and excessive bleeding.
Endorsing CMO’s opinion, Budaun District Magistrate Kumar Prashant said, “Whatever help can be given from the department, it will be given. She was an anganwadi sahayika (helper). We are also paying attention to the security of the family.”
The victim’s son said his mother had gone to offer prayers at the temple on Sunday but she did not return home within the expected time.
It was only around 11 pm that the temple priest and his two aides came to their house and handed over her body, he added.
Before the family members could ask how she died, the accused left the house saying she had fallen in a dry well and her body was pulled out and brought to her home.
The victim’s son said the police was informed on Monday.
Amid the opposition’s uproar, the Chief Minister’s Officer said in a tweet, The UP CM @myogiadityanath has taken cognizance of the Badaun incident and instructed to take strongest legal action against the accused.
The Chief Minister has also instructed the ADG Bareilly zone to submit a detailed report regarding the incident. The CM has directed the UPSTF to provide assistance in the investigation in the incident, it said.
Congress general secretary Priyanka Gandhi Vadra, who is also in charge of the party’s affairs in Uttar Pradesh, hit out at the Yogi Adityanath government, alleging that there was something wrong in the intention of the state administration on the issue of women’s security.
Party spokesperson Randeep Singh Surjewala termed the incident “horrific” and “shameful for humanity”.

“How many more Nirbhayas? How much more of this monstrosity? When will the Adityanath government wake up? Where are our awakened journalists,” he said in a tweet in Hindi.
Taking to Twitter, Samajwadi Party said, “Fifty-year-old anganwadi assistant, who had gone to offer prayers at a temple in Budaun, was gang-raped and subsequently murdered. Those in power, who only make false claims of women security, should drown themselves. The guilty should be punished at the earliest and justice should prevail.”
Bahujan Samaj Party supremo Mayawati termed the incident “extremely saddening” and “highly condemnable”.
In a tweet in Hindi, she said, “The state government should take the incident seriously and ensure stringent punishment to the guilty so that such cases are not repeated. This is the demand of the BSP.”
The Budaun incident comes months after a Dalit woman from Hathras was allegedly raped by four men on September 14 and died on September 29 at Delhi’s Safdarjung Hospital. (PTI)