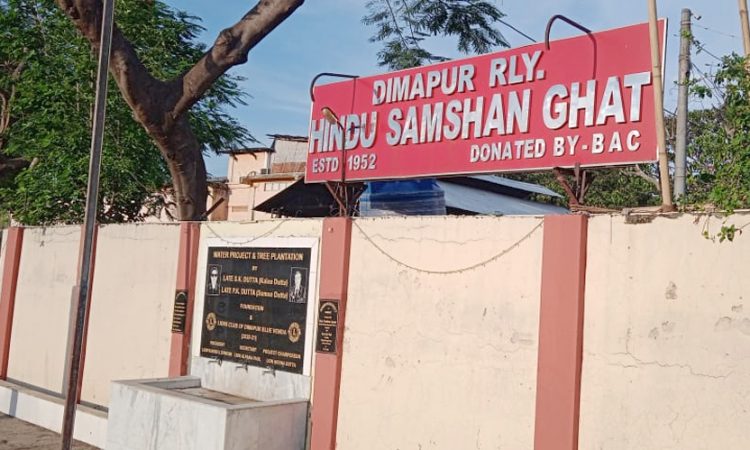 Gautam Mazumdar, Secretary of Dimapur Railway Hindu Samshan Ghat Committee, told Nagaland Page that in 2020, there were only 2 cremations of COVID victims at the samshan.
However, midway into 2021, there have been 15 such cremations this year already.
Sitting in a tiny room where a few PPE kits, packets of food supplies, gallons of sanitizers among other things are stored, Mazumdar said that when the bodies of people who had succumbed to COVID were brought last year, there was a momentary fear, although subdued quickly.
Since then a team from the Committee has been constantly and closely monitoring each case and cremated many bodies, especially of those who had no one to do the needful because of fear or other reasons and at the request of those families who needed their help in disposing the bodies.
Mazumdar narrated an instance when a few people had arrived at the gate of the samshan with a dead body.
The person who had died was a Hindu, but his wife wasn’t, and there were no one to assist them in cremating the body as they wanted to do it according to Hindu rituals.

It was the Committee members who put on PPE kits and cremated him.
The Committee, which comprises a handful of people, is more or less the only authority that takes care of every affair of the samshan and most of the time spends money out of their own pockets to make the ends meet.
Mazumdar informed that with Coronavirus, there emerged the necessity of sanitising the samshan over and over after cremating each dead body, and this meant added expenditure.
It compelled the Committee to decide to increase the fee from Rs 300 to Rs 500 which it charges when a body is brought to the samshan.
In case a family is too poor to pay the fee, it is exempted.
This fee is also the only source of revenue for the samshan and is never enough for all the expenditures.
Till a few years ago, the samshan Committee used to collect small amounts from Bengali Hindu families within Dimapur every month but the practice has been discontinued.
Though the exact date of the establishment of the samshan cannot be established, according to the President of the committee, Swapan Paul, it was in the early 1950s that the Hindu Bengali employees of the Indian Railways stationed at Dimapur felt the need of a cremation ground, and they started cremating the dead on an abandoned piece of land which today has taken the form of the Dimapur Railway Hindu Samshan Ghat.

Talking to Nagaland Page at his residence here at Railway Colony, Paul said that he has been part of the committee for 40 years now and during this pandemic, only a few organisations have come forward to assist it.
He mentioned that last year the District Administration had provided it with PPE kits and the DMC had provided it with sanitizers; and this year, the Rashtriya Swayamsevak Sangh (RSS) members had donated wood and PPE kits.
Over the years, all the developments that the samshan had witnessed were the results of contributions made at different points of time by various individuals and organisations, including the boundary wall which was financed by former Chief Minister Hokishe Sema, and both Paul and Mazumdar maintained that the samshan don’t take cash contributions.
In 2020, a group of youngsters from different faiths called United Youth Association, led by its President Rajen Dey and executive members Sanjib Roy, Rajesh Malakar, Arjun Saha, Sankar Dey, Biman Dey, Rakesh Sutradhar, Arjun Saha, Raja Paul and Mrigango Malakar among others, had decided to make the samshan a less gloomy place and initiated the construction of a garden within the compound as well as tiling of a seating space.

The initiative was taken along with a garden construction at the premises of Sai Baba Mandir at Bokajan.
But being mainly self-funded, the project took longer than planned due to financial constraints.
Rajen told Nagaland Page that 90% of the project has been completed.

The group also plastered a stretch of the wall at the samshan, installed lights and filled portions of the area that gets frequently flooded with soil brought from Rangapahar.
He also mentioned that besides the project, the “union of friends” also provided dry rations to households during the pandemic and shared that it is his personal dream to see a public library being established, for which he has been collecting books.
At latest count, he has collected more than a thousand books.
Lately, because of the lockdown, a difficulty has emerged in availing wood for the pyre, and the RSS’ contributions have made things easier for the people who come to cremate the dead.
Though historically the samshan never had wood ready for the dead, the wood contributed to the samshan by RSS is viewed as a solution to two issues: first, it eases the difficulty of people procuring the wood; and second, the earnings made through the sale would be a source of revenue.
The Committee plans to continue maintaining a reserve of wood ready at the samshan and people would have the choice of either buying from there or from other sources.
In case there are poor people who cannot afford the cost, they “can be considered” to provide the wood free of charge.
According to Paul, while the members of the committee are doing “much hard work”, their efforts are hardly recognised.
On a similar note, Mazumdar told Nagaland Page that whenever a dead body is brought at DRHSG, one of the Committee members is always present, regardless of the time and weather.
And in case of COVID-19 deaths, if a body is brought by an organisation in proper PPE kits, they let the organisation handle it, if not, the members put on PPE kits and do the necessary.

They also prepare the chulah beforehand if they are informed about the cremation in advance, so that once the body is brought, it can be disposed quickly and safely.
For now, because of the COVID situation, a member is temporarily staying at the samshan throughout the nights.
“Since the bodies come in secured coffins, we feel safe”, said Mazumdar, while adding that it also increases the need for wood.
Compared to bodies that are burnt without boxes, 3.5 quintal of wood is enough, but for the bodies that come in boxes, it requires about 50 kg more wood.
According to Paul, the samshan requires an electric stove.
Besides taking care of the affairs of the samshan, the Committee has also been actively associated in distributing relief food to the needy, and the packets of ration kept ready and piled at one corner of the room are for the needy, who might come.
Both Mazumdar and Paul agreed that while they do all these activities, they largely stay away from putting any photographs on social media and encouraged others who might want to do any service at the samshan to follow the same.
Both of them also refuted claims that the samshan is charging thousands of rupees from people who come for cremation. Mazumdar explained that there could be instances when a party might have been charged more than the usual but that is only when services from people outside had to be used and they had to be paid.
Recently, Dimapur Bongs, an NGO, has also been cremating those who have succumbed to the virus. In their case, they perform the cremation only take when approached or there is no one to take care of the dead.