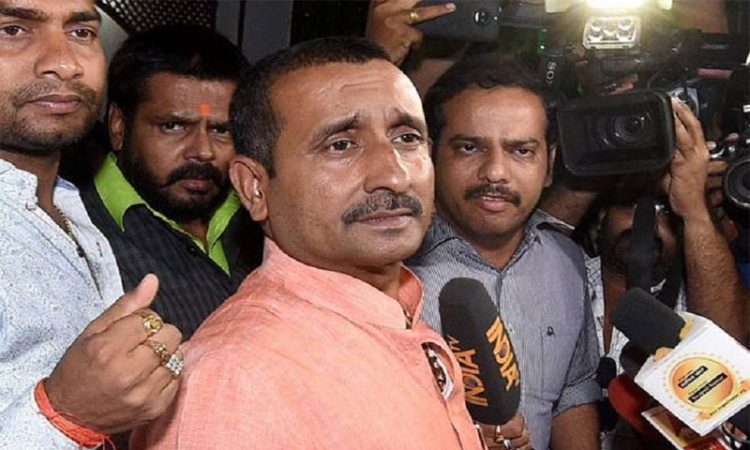 Lucknow, July 29: A murder case was registered against Kuldeep Sengar, the BJP MLA accused of raping the Unnao girl whose car was hit by a truck on Sunday afternoon, killing two of her aunts and critically injuring the rape survivor and her lawyer. Sengar’s brother Manoj Singh Sengar and 8 others have also been named in the FIR and booked for the same crime.
“FIR has been registered under the Indian Penal Code’s sections 302 (murder), 307 (attempt to murder), 506 (criminal intimidation), 120b (criminal conspiracy) against 10 named persons, including the BJP MLA, and 15-20 others,” a police officer said.
The FIR was registered after a complaint was filed by the girl’s uncle in Rae Bareli where the truck rammed the car rape survivor’s family was travelling in. They were returning from Rae Bareli prison after meeting her uncle, who is in jail in a forgery case.
District Magistrate, Raebareli, Neha Sharma, while talking to reporters said: “I myself with SP visited the Raebareli jail and met Mahesh Sharma. He had given application for parole and as he is resident of Unnao it has been forwarded to the Unnao DM.”
“He also gave two other applications. One for registration of FIR on which it has already been registered and the other for CBI probe into the matter. This application has been forwarded to Principal Secretary, Home,” the DM added.
The girl’s mother, who also received grievous injuries in the same accident, has termed the Sunday’s incident a conspiracy to wipe out her family.
“It was not an accident but a conspiracy to eliminate all of us,” her mother told reporters in Unnao on Monday.
“The son of a co-accused in the case, Shahi Singh, and another youth of the village had threatened us. They said that they will deal with us,” she said.
The sedan in which the four were travelling was hit by a truck at Sultanpurkheda crossing. The victim’s aunt and another woman relative, who were in the car, were killed in the accident.
The lawyer is battling for life with head injuries and multiple fractures in KGMU Trauma Centre, Lucknow.
Police also said on Monday that the registration plate of the truck that hit the car carrying the rape survivor’s family was scrubbed, but they have managed to retrieve the number. The truck has been impounded and the driver arrested, they said.
Tagging a media report on the accident, Congress leader, Rahul Gandhi tweeted:”Beti Bachao-Beti Padhao. A new special education bulletin for Indian women. Don’t ask questions if a BJP MLA is accused of having raped you.”
In a tweet, BSP supremo Mayawati said: “Her (the rape victim’s) maternal and paternal aunts were killed and she herself and her advocate are seriously injured. The Supreme Court need to take cognizance of the matter and ensure strict action.”
West Bengal Chief Minister Mamata Banerjee urged Prime Minister Narendra Modi to form a high-level inquiry committee to probe the survivor’s accident, while her Delhi counterpart Arvind Kejriwal described it as a “pre-planned conspiracy” and that the incident is a “mockery of the law”.
The girl had accused Sengar of raping her at his residence where she went along with another relative seeking a job in 2017. Sengar was arrested on April 13 last year. (Agencies/PTI)