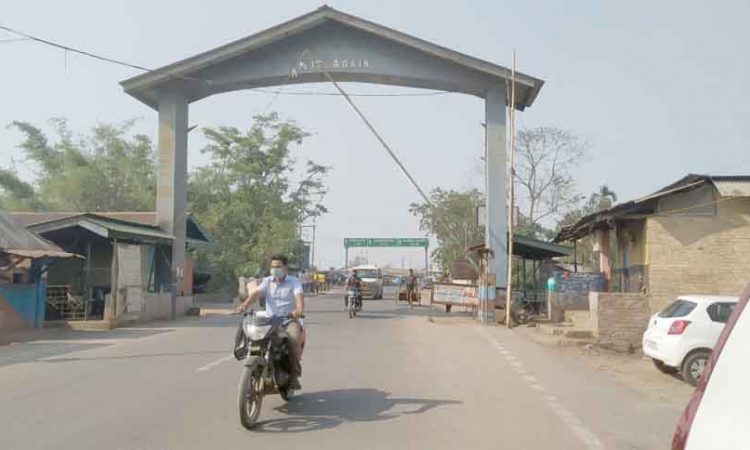 No screening of people at New Field Check Gate

Dimapur, April 24: At a time when Nagaland is witnessing continuous rise in Covid-19 positive cases and night curfews have been imposed in different districts in desperate attempts to contain the spread of corona virus, the way entry points to the State are being regulated certainly raises questions.

On Saturday, an official at Dimapur Airport refused to give any information to Nagaland Page about how screening is being carried out at the airport citing directives that he will be able to provide details if he is provided with a written directive from the higher authorities. He, nevertheless, said screening is being carried out strictly.
Nagaland Page could interview two persons at the airport and while one person said he was offered hand sanitizer and his temperature was checked, the other confirmed only receiving the sanitizer. Both, however, had produced negative RT-PCR reports.
An auto driver at the airport told Nagaland Page that returnees who could produce a negative RT-PCR report are allowed to go after the thermal screening while people who fail to show their negative reports have to undergo tests paying Rs 1500 at the airport.
Nagaland Page could not verify the claim of the driver with the officials.
The Dimapur Railway Station remains one of the important entry points which the Government and the railways continue to fail to properly manage. The person in charge Saturday afternoon told Nagaland Page that screening is done only for those entering the station via the main entrance gate but the other entry/exit points are not screened.
According to the official, if the temperature of those who are screened is above normal, they are sent to the district hospital for further tests.
It needs to be mentioned here that people who wait for trains at the platform are not being screened; however, a few employees of the stores inside the station confirmed that medical department had once come and tested them for the virus.
A traveler who had returned to Nagaland from Assam on April 23 told Nagaland Page that she didn’t find any one to even do the thermal screening once she reached the station though she had brought with her a negative report.
While the station and airport are carrying on with minimal precautions, the personnel manning the Nagaland Gate at Golaghat Road is not following any measures so far. They told Nagaland Page that they are yet to receive any directive from their higher ups in regards to checking/ascreening travelers.

Unfortunately for the people of Nagaland, that directive is unlikely to come, as the State Government and the health department appears to have already given up on securing the entry points in their belief that the numerous points of entry to the State and the porous border make it extremely difficult to monitor everyone at points of entry. (Page News Service)