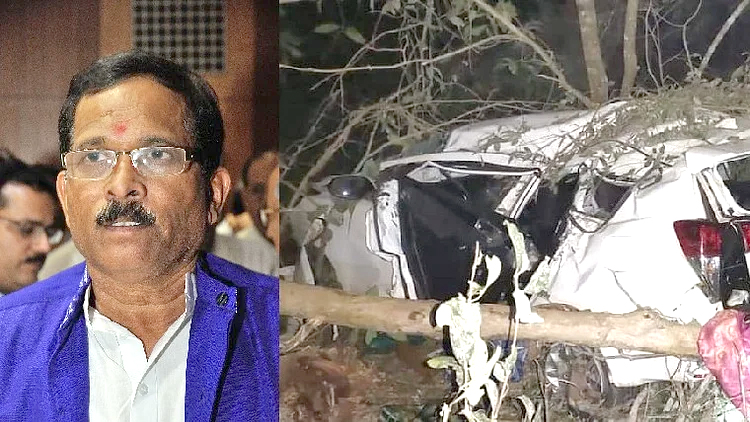 ANKOLA, January 11: Union minister Shripad Naik’s wife and his close aide died in a road accident when the SUV they were travelling in met with an accident near Hillur-Hosakambi village in Ankola taluk on Monday.

Naik’s wife Vijaya suffered head injuries and died while being brought to a private hospital in Ankola. One more person in the car died in a government hospital.
The condition of Union minister Naik is said to be stable and he was shifted to Goa Medical College after preliminary treatment in Ankola.
Prime Minister Narendra Modi has spoken to Goa chief minister Pramod Sawant to ensure proper arrangements for the treatment of Shripad Naik at Goa.
Union home minister Rajnath Singh expressed his sympathies on the incident and wished Naik a speedy recovery.
Rajnath also told Goa CM that he will arrange a special air ambulance to airlift Shripad Naik if required.
Naik and four of his family members had visited Gante Ganapati temple at Yellapur in the morning. The minister and his family performed the pooja in the temple and later proceeded to Gokarna at around 7pm.
The car diverted from the NH-63 to a sub-road, which is a shortcut to Gokarna. The road was in very bad condition and the driver lost control over the vehicle and the car turned upside down.
“It was not a collision between vehicles. Prima facie it appears to be the case of the driver losing control of the car” a police officer told PTI.
Vijaya and two others suffered serious head injuries. Police rushed to the spot shiftted the injured persons to the hospitals in Ankola.
Ankola police have registered a case.
(TNN With inputs from Deepak Shenvi)