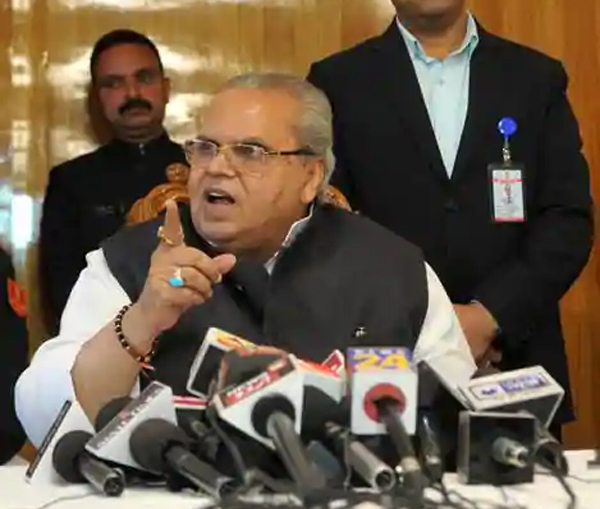 Jammu, November 22: Jammu and Kashmir governor Satya Pal Malik on Thursday defended the dissolution of the state assembly on grounds that he didn’t want an “unholy alliance” of opposing political ideologies to assume power by inducing defections, as a bitter war of words raged on between opponents and supporters of his contentious action the night before.
Meanwhile, both the Bharatiya Janata Party (BJP) and the National Conference (NC) veered around to the view that fresh and early assembly elections are the only way out of the political vacuum in the sensitive state, which has been under direct federal rule since June 20.
Malik, who was named J&K governor in August, explained the rationale behind his decision on Wednesday night in greater detail at a press conference and in media interviews . “I have been saying it since day one of my appointment as governor that I’m not in favour of any government formed in the state with underhand defections and horse trading. I would instead want that elections are held and a selected government rules.”
He dissolved the state assembly after Peoples Democratic Party (PDP) chief Mehbooba Mufti staked her claim for forming a new government with the support of arch rival NC and the Congress, five months after the collapse of PDP’s coalition government with the BJP. She claimed the PDP had the support of 56 MLAs, including its own 28 legislators. Malik also had to contend with a rival claim by People’s Conference chief Sajjad Lone, who said he had the support of the BJP’s 25 legislators and “more than 18” other members of the 87-member assembly. His party had been counting on the support of PDP dissidents.
“For the past 15 to 20 days, I have been getting reports of large-scale horse trading. MLAs are being threatened and several types of underhanded dealings are going on,” Malik told reporters at Raj Bhawan.
“Had I given any side an opportunity (for government formation), it would have created more mess. The value system of politics would have been destroyed as has been happening in the rest of the states. I could not afford that.”
Home minister Rajnath Singh distanced the BJP from the governor’s decision.“The governor of J&K took the decision after considering the political situation there; he reached to a conclusion that government formation was not possible in the state,” Singh said in an interview to HT. “It was a decision taken by the governor. The BJP has no role. It is unfortunate that some section is trying to drag the BJP into this.”
The governor insisted that he had not received a fax from Mufti claiming the support of rival political parties.“But even if I had, my decision would have been the same,” he said. Mufti posted the text of the fax she tried to send him on Twitter late on Wednesday night.
Senior Congress leader P Chidambaram slammed Malik for dissolving the state assembly, saying he had been happy to keep it under suspended animation as long as no one staked a claim for forming government.
“The moment someone staked a claim, he dissolved the Assembly! Parliamentary democracy standing on its head! The Westminster model of democracy is outdated. Like in all other matters, it is the Gujarat model that has appealed to the J&K Governor,” Chidambaram tweeted.
On the timing of his decision to abruptly dissolve the assembly after waiting for five months, the governor noted that a six-month deadline for keeping the assembly in suspended animation expires next month. “Plus, it was a holy day. It was Eid,” he said, declaring that Mufti and the others were free to approach the courts against the dissolution.
On Thursday, former chief minister Omar Abdullah challenged the governor to disclose who was trying to buy the MLAs. Abdullah and Mufti also took on BJP national general secretary Ram Madhav for saying their parties were taking instructions from Pakistan.
“PDP and NC boycotted local body polls last month because they had instructions from across the border. Probably they had fresh instructions from across the border to come together and form government. What they did prompted Governor to look into the whole issue,” Madhav said.
Abdullah lashed back. “I dare you @rammadhavbjpji to prove your allegation….have the guts to place evidence in the public domain. Either prove this or be man enough to apologise. Don’t practice shoot & scoot politics,” Abdullah tweeted.
Mufti said she was shocked that such allegations had been hurled gainst mainstream parties in Jammu and Kashmir. ‘’Sad to see what the political discourse of our country has been reduced to. How does one define a party’s nationalistic credentials? Nationalistic and patriotic only if you are with the Centre and Pakistan sponsored and anti nationalistic otherwise?’’ Mehbooba said.
Abdullah and the BJP both came out in favour of a new government being installed following fresh elections in J&K, where the 2014 polls produced a hung legislature and prompted the PDP and BJP to tie up in an alliance that lasted almost 40 months.
“Currently panchayat elections are happening. After these we need some time for preparations. If the assembly elections are not held before parliamentary elections, at least these should be held along with the parliamentary elections, so that within next six months, people have a new government,” he said.
Abdullah revealed that the elections won’t be fought by the three parties together. “I don’t think NC, PDP and Congress fighting elections together will in any way benefit the state of Jammu and Kashmir because I believe a legitimate political opposition, political voices are essential,” he said.
The BJP’s central unit said in a Twitter post on Wednesday that the best option was to hold fresh elections in J&K at the earliest and slammed the proposed alliance between the PDP, NC and Congress as a “combination of terror-friendly parties.” (Courtesy: HT)