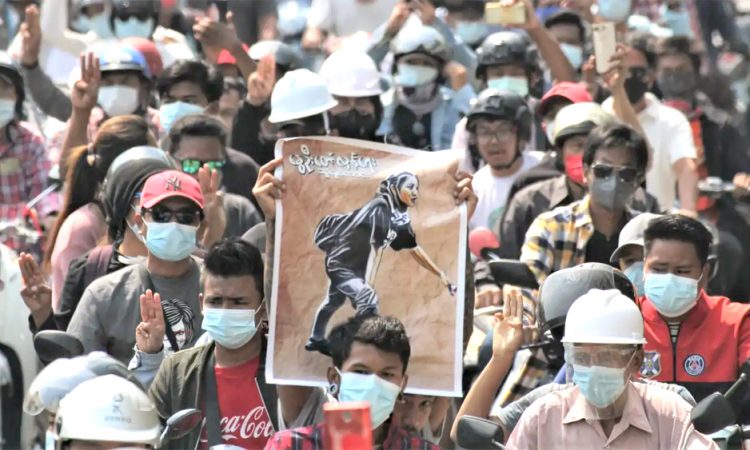 Mourners hold a sketch of Angel, a 19-year-old protester killed by security forces in Mandalay, at her funeral on March 4. @ Reuters

GENEVA, March 4: At least 54 people have been killed and over 1,700 detained since Myanmar’s February 1 coup, the UN rights chief said Thursday, demanding that the military “stop murdering” protesters.

The comments come after the deadliest day of protests in Myanmar, with at least 38 dead on Wednesday in rallies where security forces were seen firing into crowds.
UN rights chief Michelle Bachelet urged security forces to “halt their vicious crackdown on peaceful protesters”.
“Myanmar’s military must stop murdering and jailing protesters,” she said in a statement.
“It is utterly abhorrent that security forces are firing live ammunition against peaceful protesters across the country,” she added.
Bachelet added that she was “also appalled at the documented attacks against emergency medical staff and ambulances attempting to provide care to those who have been injured”.
The UN rights office said it had corroborated information that at least 54 people had been killed by police and military officers since February 1.
“The actual death toll, however, could be much higher as these are the figures the office has been able to verify,” it stressed.
The killings have escalated sharply in recent days.
The UN rights office had verified 30 of the 38 deaths reported by other UN entities on Wednesday, saying the killings by security forces had taken place in Yangon, Mandalay, Sagaing, Magway and Mon.
Another person was documented killed on Tuesday and 18 people on Sunday, with five prior to that.
It said it was difficult to document injuries, but that “at a minimum, hundreds have been wounded during protests”.
Since the coup, more than 1,700 people have also been “arbitrarily arrested and detained in relation to their participation in protests or engagement in political activity,” the statement said.
At least 700 people were detained on Wednesday alone, with many of them reportedly swept up as soldiers and police conducted door-to-door searches.
-End military ‘stranglehold’ – Those arrested include parliamentarians, political and rights activists, election officials, teachers, healthcare workers, journalists and monks, it said.
“Many of the arbitrary arrests and detentions that have been carried out since February 1 may constitute enforced disappearances,” Bachelet warned, calling for the immediate release of all those who remain arbitrarily detained.
She also expressed alarm at the targeting of media workers, with at least 29 journalists arrested in recent days, eight of whom had been charged with crimes, including inciting opposition or hatred of the government and attending unlawful assemblies.
“I urge all those with information and influence… to support international efforts to hold military leaders accountable for the serious human rights violations that have been committed both now and in the past,” Bachelet said.
“This is the moment to turn the tables towards justice and end the military’s stranglehold over democracy in Myanmar.”
UN envoy: Myanmar army is ‘surprised’ at opposition to coup

The UN special envoy for Myanmar said the generals who have seized power in the Southeast Asian nation indicated they don’t fear renewed sanctions, though they are “very surprised” that their plans to restore military rule without much opposition isn’t working.
Christine Schraner Burgener told UN correspondents Wednesday that after the February 1 military coup that ousted Aung San Suu Kyi’s elected government from power she warned Myanmar’s army that the world’s nations and the UN Security Council “might take huge strong measures.”
“And the answer was, ‘We are used to sanctions and we survived those sanctions in the past,’” the UN envoy said.
When she also warned the army that Myanmar would become isolated, Schraner Burgener said, “the answer was, ‘We have to learn to walk with only a few friends.’”
The coup reversed years of slow progress toward democracy in Myanmar, which for five decades had languished under strict military rule that led to international isolation and sanctions. As the generals loosened their grip, culminating in Suu Kyi’s rise to power after 2015 elections, the international community responded by lifting most sanctions and pouring investment into the country.
Schraner Burgener noted that opposition to the coup was being spearheaded by young people who lived in freedom for 10 years, noting they “are well organized and very determined they don’t want to go back into dictatorship and isolation.” She was speaking by video link from Bern, Switzerland, on what she called “the bloodiest day since the coup.”
Schraner Burgener urged a united international community “to take the right measures,” stressing that Security Council sanctions that must be implemented by every country would be “more powerful” than sanctions by individual countries.
The council has scheduled closed consultations for Friday on calls to reverse the coup — including from UN Secretary-General Antonio Guterres — and the escalating military crackdown, which Schraner Burgener said killed 38 people on Wednesday alone.
Schraner Burgener said she receives about 2,000 messages a day from people in Myanmar, many desperate to see an international response. She said she also speaks every day with representatives of the ousted Parliament and has spoken several times with the armed forces deputy commander-in-chief, Soe Win, most recently on Feb. 15.
Schraner Burgener said the deputy commander explained in their first phone call on February 4 that the new State Administration Council — the name for the new ruling junta — is charged with implementing a five-step military roadmap.
That roadmap, which the junta has also published in state-run media in Myanmar, includes reconstituting the electoral commission, which rejected the military’s allegations of fraud in a November election where Suu Kyi’s party won 82% of the vote. She said that has already been done.
It aims for a national cease-fire agreement with all 21 ethnic armed groups in Myanmar, which Schraner Burgener said is going to be difficult as 10 have already taken a strong stand against the coup.

It also aims at stamping out Covid-19 and recovering business activity. It’s final task is holding new elections in a year.
Schraner Burgener said in her view the military’s “tactic” was to investigate members and leaders of Suu Kyi’s National League for Democracy party, prove they committed crimes like election fraud, treason or working with foreigners, and put them in prison.
“And then the NLD will be banned and then they will have new elections where they want to win, and then they can continue to stay in power,” she said.
“The army had told me the plan — to threaten the people, to make arrests and then the majority of the people would go home because they have fear,” Schraner Burgener said. Then the military “have the control back again,” and people will get used to the situation “and go back to business as usual.
She said the army is surprised by the opposition, which has been led by young people.
“I think that the army is very surprised that it doesn’t work because in the past, in 1988 and 2007 and 2008, it worked,” she said, noting the years of previous violent military crackdowns on uprisings against its rule.
She has an office in the capital, Naypyitaw, and has been asking to return since the coup on condition she can talk to the military leaders and see representatives of the ousted parliamentarians and Suu Kyi and ousted President Win Myint, who are among some 1,200 people she says are detained.
“I really hope to visit Myanmar as quickly as possible,” she said. “I don’t have the solution on the silver plate, but I have some ideas which I would like to discuss.”
Schraner Burgener didn’t disclose the ideas.
She said the military has told her the time isn’t right yet for a visit. She asked if she could visit if she lifted her conditions and said she was told it wouldn’t make a difference.
During her three years as the UN special envoy, Schraner Burgener said she always warned the Security Council and the General Assembly that a coup could happen because she knew the structure of the government — that the military had the power.
Under Myanmar’s constitution, drafted under military rule, the army maintained control of many key ministries surrounding defense and security and also was guaranteed enough seats in Parliament to override any changes to the charter.
“I always felt she was on a tightrope dealing with the army,” Schraner Burgener said of Suu Kyi.
Schraner Burgener said she thought military chief Senior General Min Aung Hlaing, who staged the coup, was “really afraid” that Suu Kyi would have more success with reforms following her “overwhelming victory in the election.” (AFP/AP)