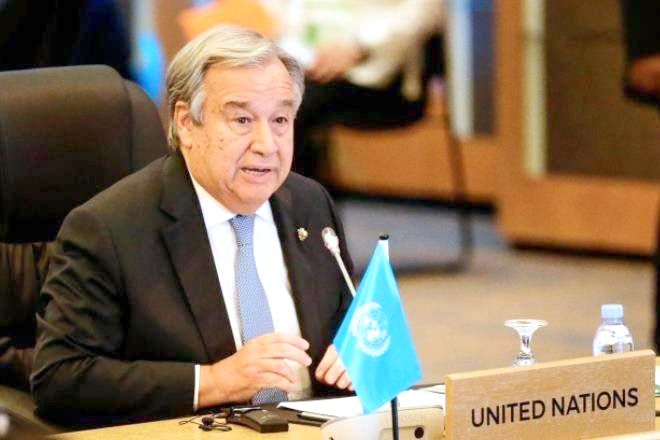 UNITED NATIONS, SEPTEMBER 1: The COVID-19 pandemic has deepened inequality between men and women and reversed decades of limited and fragile progress on gender equality and women’s rights, the United Nations chief said.
Since the start of the pandemic, he said women have been on the front lines of the response, as healthcare workers, teachers, essential staff and as carers in their families and communities.
Yet, while 70 to 90% of healthcare workers are women, only 30% are in decision-making roles, he said.
Guterres said the pandemic has impacted physical and mental health, education, and labor force participation.
Today, millions of teenage girls around the world are out of school, and there are alarming reports of an increase in teenage pregnancies in some countries, he said. We know from the Ebola outbreak in West Africa that when teenage girls leave school, they may never return.
The Secretary-General also pointed to disturbing reports from around the world of skyrocketing levels of gender-based violence, as many women are effectively confined with their abusers, while resources and support services are redirected.
In short, he said, the pandemic is exposing and exacerbating the considerable hurdles women face in achieving their rights and fulfilling their potential.
And Guterres warned that progress lost may take years, even generations, to recover.
The Secretary-General issued a policy briefing in April on the impact of the pandemic on women, and stressed again that they must be at the centre of all efforts to tackle and recover from the Coronavirus.
The pandemic is only demonstrating what we all know: that millennia of patriarchy have resulted in a male-dominated world with a male-dominated culture which damages everyone women, men, girls and boys, he said. This is the time to rebuild more equal, inclusive, and resilient societies.
On the health front, Guterres said women are suffering because funding is being redirected from maternal and reproductive health services.
Guterres said the UN has also urged Governments to prioritise the protection of women from gender-based violence in their national COVID-19 plans. He said he was heartened that more than 140 Governments committed to taking action to designate women’s shelters as essential, and to continue and expand online services.
On the economic front, he said, mitigating the social and economic impact of the pandemic starts with putting money into the hands of women who work in both the formal and informal economies. (AP)