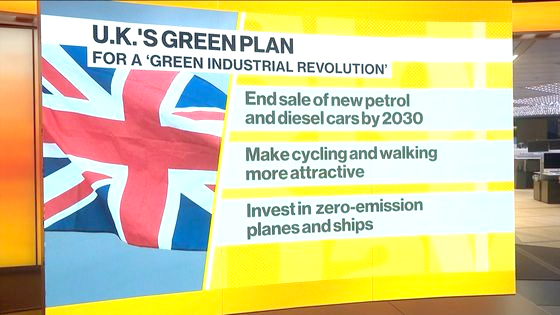 London, November 18: UK Prime Minister Boris Johnson on Wednesday unveiled plans for a new Green Industrial Revolution for the country, including a ban on the sale of new petrol and diesel cars by 2030 and new measures to become a world leader in carbon capture.
Downing Street says the government has mobilised 12 billion pounds for the 10-point plan, which it claims will support up to 250,000 jobs and comes as the UK prepares to co-host the Climate Ambition Summit on December 12 and the UN COP26 climate summit next year.
Johnson will also speak about the plan in the House of Commons as he attends the weekly Prime Minister’s Questions (PMQs) session for the first time via videolink from Downing Street, where he continues to self-isolate following contact with an MP who later tested positive for COVID-19.
Although this year has taken a very different path to the one we expected, the UK is looking to the future and seizing the opportunity to build back greener, said Johnson.
The recovery of our planet and of our economies can and must go hand-in-hand. As we look ahead to hosting the COP26 climate summit next year, I am setting out an ambitious plan for a green industrial revolution that will transform the way we live in the UK. This is a shared global challenge every country in the world needs to take action to secure the future of the planet for our children, grandchildren and generations to come, he said.
The ban on the sale of new petrol and diesel cars and vans by 2030, with hybrid cars to follow in 2035, brings forward a previous deadline of 2040.
The strategy will focus on transforming the UK’s national infrastructure to better support electric vehicles.
This will put the UK on course to be the first G7 country to decarbonise road transport, Downing Street said.
Besides the government’s mega investment, the aim is to spur over three times as much private sector investment by 2030, to build the green jobs and industries of the future across the UK and around the world.
Johnson will also host a virtual roundtable with investors as part of this incentivisation of private sector investment.
For the automobile sector, the investment plans include 1.3 billion pounds to accelerate the rollout of chargepoints for electric vehicles in homes, streets and on motorways across England, so people can more easily and conveniently charge their cars.
Grants of 582 million pounds will be in place for those buying zero or ultra-low emission vehicles to make them cheaper to buy and incentivise more people to make the transition.
And, nearly 500 million pounds will be spent in the next four years for the development and mass-scale production of electric vehicle batteries.
The other areas of focus will include on producing enough offshore wind to power every home, quadrupling how much the UK produces to 40GW by 2030, and to generate 5GW of low carbon hydrogen production capacity by 2030 for industry, transport, power and homes, and developing the first town powered entirely by hydrogen by the end of the decade.
Advancing nuclear as a clean energy source, across large scale nuclear and developing the next generation of small and advanced reactors; making cycling and walking more attractive ways to travel and investing in zero-emission public transport of the future; supporting difficult-to-decarbonise industries to become greener through research projects for zero-emission planes and ships and making homes, schools and hospitals greener, warmer and more energy efficient, with an ambition to install 600,000 heat pumps by 2028.
Apart from that also becoming a world-leader in technology to capture and store harmful emissions away from the atmosphere, with a target to remove 10MT of carbon dioxide by 2030; protecting and restoring the natural environment, including planting 30,000 hectares of trees every year; and developing the cutting-edge technologies needed to reach these new energy ambitions.
To revitalise the birthplaces of the first industrial revolution, the UK will be at the global forefront of carbon capture, usage and storage technology, benefiting regions with industries that are particularly difficult to decarbonise, Downing Street said.
Therefore, an extra 200 million pounds of new funding will be available to create two carbon capture clusters by the mid-2020s, with another two set to be created by 2030.
Besides, up to 500 million pounds is earmarked for trialling homes using hydrogen for heating and cooking, starting with a Hydrogen Neighbourhood in 2023, moving to a Hydrogen Village by 2025, with an aim for a Hydrogen Town equivalent to tens of thousands of homes before the end of the decade. Of this funding, 240 million pounds will go into new hydrogen production facilities.
And, 525 million pounds will help develop large and smaller-scale nuclear plants, and research and develop new advanced modular reactors.
Other key parts of the 10-point plan will be driven forward by “significant” investment set out over the last year, including the 1 billion pounds energy innovation fund to stay ahead of the latest technologies needed to reach new energy targets, 5 billion pounds for alternative greener ways of travel including cycling, walking, and buses, and 5.2 billion pounds to create for new flood and coastal defences in England by 2027. (PTI)

China to launch its first spacecraft to moon to collect samples, return to earth