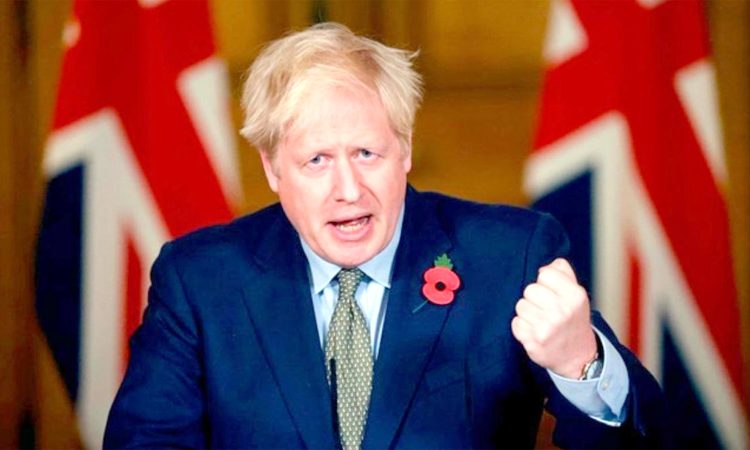 London, November 10: UK Prime Minister Boris Johnson has cautiously welcomed the promising results from the Pfizer/BioNTech vaccine and warned people not to rely on this news as a solution as it is still “very, very early days”.
Addressing a briefing from 10 Downing Street here on Monday, Johnson urged the British public not to slacken their resolve as it is still very, very early days , even as he confirmed that the UK had pre-ordered 40 million doses of the Pfizer vaccine enough for about a third of the UK population, taking into account that two doses each are required.
The Pfizer/BioNTech Vaccine has been tested on over 40,000 volunteers and interim results suggest it is proving 90 per cent effective at protecting people against the virus. But we haven’t yet seen the full safety data, and these findings also need to be peer-reviewed, said Johnson.
We have talked for a long time, or I have, about the distant bugle of the scientific cavalry coming over the brow of the hill, and tonight that toot of the bugle is louder. But it is still some way off. And we absolutely cannot rely on this as a solution, he said.
He reiterated that it is crucial not to overdo things and follow the lockdown rules strictly until December 2, after which England is set to revert to a tiered lockdown system.
We cannot let our enthusiasm (about a vaccine) run away with us. It is more vital now than ever that we follow the basics, said the prime minister.
England’s deputy chief medical officer Prof Jonathan Van-Tam, who joined Johnson at the briefing, said he was “hopeful” that the first vaccine could be seen by Christmas after Pfizer’s announcement earlier on Monday that its vaccine candidate has proven 90% effective in a large trial.
This is a very important scientific breakthrough. I am certain of that. I am hopeful because of all that, but not yet certain that we could begin to see some vaccine by Christmas I think we have to be optimistic but we have to wait and see how vaccine manufacture goes, said Prof Van-Tam.
Alas, the death figures are tragically rising, running at an average of over 300 a day sadly double where they were 24 days ago. The number of COVID-19 patients in hospital has risen from just over 10,000 two weeks ago to nearly 13,000 on November 5, and we are heading towards the levels of the previous peak, said Johnson, as the experts ran through the statistics with him.
Meanwhile, on Tuesday UK Health Secretary Matt Hancock said the National Health Service (NHS) is ready to start providing the new coronavirus vaccine “as fast as safely possible , with vaccination clinics to be open seven days a week.
Hancock told the BBC: “We still appeal this morning for people’s patience, firstly to follow existing rules. Because this is still a deadly disease and this is not over yet.
“Even once we start to roll it out, we still need to look after ourselves, look after our community by following the rules and being careful to stop the spread of transmission.”
The main focus of Johnson’s briefing on Monday was on the mass testing rolled out in Liverpool on Friday, which the prime minister said were being widely taken up in the city and urged others to also come forward and get tested for your friends, for your relatives, for your community .
He confirmed that the government is going beyond the city-wide pilot and sending out hundreds of thousands of rapid lateral flow tests to local authorities right across England and other parts of the United Kingdom.
We’re also working with universities to establish, as soon as possible, similar mass testing capacity for students up and down the country, Johnson added.
His comments came as a further 21,350 coronavirus cases were reported in the UK on Monday, along with 194 deaths, taking the country’s death toll towards 49,000. (PTI)