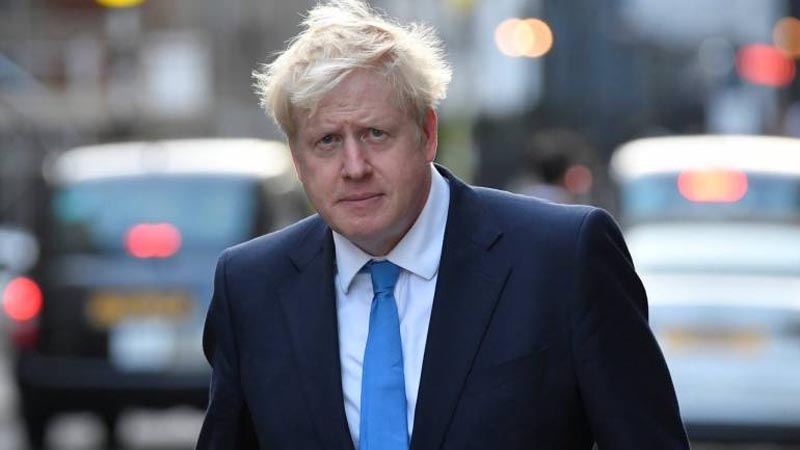 London, April 6: The UK government on Monday said Prime Minister Boris Johnson is “doing well” after staying overnight in hospital for some “routine tests” related to his COVID-19 diagnosis.
UK housing and communities secretary Robert Jenrick said Johnson remains in charge of the UK’s response to the coronavirus pandemic and is expected back at No.10 Downing Street soon.
“This wasn’t an emergency admission. It was a planned admission to undergo some routine tests. He is doing well, I am told, and we look forward to him being back at No. 10 soon,” the Cabinet minister told the BBC on Monday morning.
The update on the 55-year-old prime minister’s health came following his admission to a National Health Service (NHS) hospital in London on Sunday evening for tests after he showed “persistent symptoms of coronavirus”, including a temperature, even 10 days after testing positive for the disease.
His hospitalisation was described as a “precautionary step” taken on the advice of his doctor, a Downing Street spokesperson said on Sunday.
“This is a precautionary step, as the Prime Minister continues to have persistent symptoms of coronavirus ten days after testing positive for the virus,” the spokesperson said. “The Prime Minister thanks NHS staff for all of their incredible hard work and urges the public to continue to follow the government’s advice to stay at home, protect the NHS and save lives,” the spokesperson said.
Downing Street said that it was considered sensible for doctors to see the UK prime minister in person given he has ongoing symptoms but he remains in charge of the government and in contact with ministerial colleagues and officials.
UK foreign secretary Dominic Raab, the First Secretary of State, is the UK PM’s chosen second-in-command and stepped in to chair the daily coronavirus response meeting, dubbed the COVID-19 war cabinet, on Monday morning.
Johnson has until last Friday continued to chair the daily meetings remotely via video conference from his self-isolation in his private quarters in Downing Street since his diagnosis 10 days ago. The British prime minister was last seen, still looking quite poorly, when he made a brief appearance at Downing Street on Thursday night to join the national “clap for carers” applause in appreciation of the hardwork of National Health Service (NHS) workers on the frontline of the fight against the outbreak.
“Remember that incredible clapping again last night for our fantastic NHS. We’re doing it to protect them and to save lives. Let’s focus on doing everything we can. Stay at home folks, protect our NHS, save lives,” he said. Johnson posted his last Twitter video message on Friday in which he said he was still displaying minor symptoms. He had extended self-isolation on Friday, which should have marked the end of the stipulated seven-day self-isolation period after his COVID-19 diagnosis last week.
He said he still has a temperature, one of the symptoms associated with coronavirus, and would therefore have to stay in isolation for longer.
“Although I’m feeling better and I’ve done my seven days of isolation, alas I still have one of the symptoms, a minor symptom. I still have a temperature. So in accordance with government advice I must continue my self-isolation until that symptom itself goes. But we’re working clearly the whole time on our programme to beat the virus,” he said in the video message.
The UK has reported over 48,000 cases of COVID-19. On Sunday, the Department of Health said 621 more people died in hospitals in the UK over 24 hours after testing positive for coronavirus, taking the total death toll to 4,934 in the country.
US President Donald Trump began a White House press briefing by sending “our nation’s well wishes” for Mr Johnson’s “own personal fight with the virus”.
“All Americans are praying for him. He’s a great friend of mine, a great gentleman and a great leader,” Trump said, adding that he was sure the prime minister would be fine because he is “a strong person”.
Newly-elected Labour Party leader Keir Starmer also wished Johnson well, saying he hoped for a “speedy recovery”. Over the weekend, Johnson’s pregnant fiancee Carrie Symonds had revealed her own coronavirus symptoms as she said that she was “on the mend” and feeling stronger.
“I haven’t needed to be tested and, after seven days of rest, I feel stronger and I’m on the mend,” said the 32-year-old, who has been self-isolating separately at her south London flat.
UK health secretary Matt Hancock had also tested positive for coronavirus and returned from self-isolation after seven days last Thursday to host the daily Downing Street press briefing.
The UK government’s chief medical adviser, Professor Chris Whitty, has also had to self-isolate after showing symptoms, as has Johnson’s top aide Dominic Cummings. (PTI)

At least 19 million children at imminent risk due to Cyclone Amphan in India, Bangladesh:UNICEF