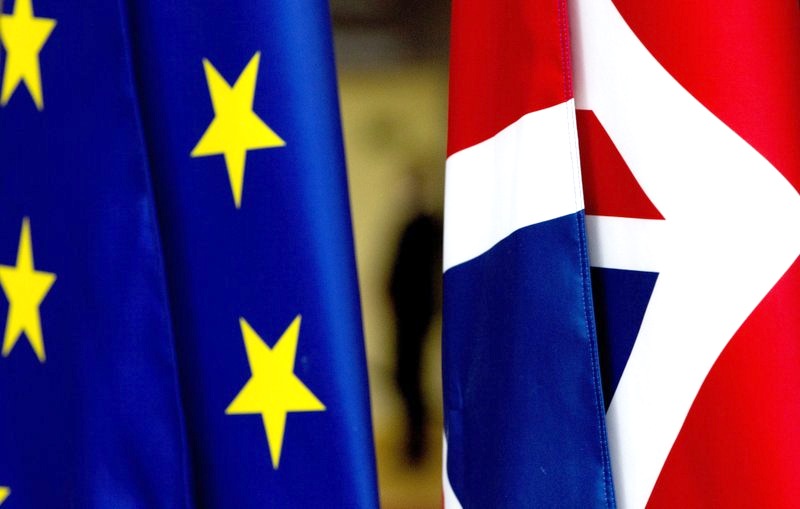 FILE - In this file photo dated Tuesday, Jan. 28, 2020, the British Union flag, right, and the EU flag, seen inside the atrium at the Europa building in Brussels. The number of Britons moving to live in European Union countries has soared since the Brexit vote in 2016, a U.K.-German study has revealed Tuesday Aug. 4, 2020.(AP Photo/Virginia Mayo, FILE)

LONDON, AUGUST 4: As the December 31 deadline of the UK’s exit from the European Union nears, a new study released on Tuesday suggests that the country is facing a brain drain, noting major changes in migration decisions that it says are equivalent to the impact of a serious economic or political crisis.
The study by the Oxford-in-Berlin research partnership and the WZB Social Sciences Center Berlin reveals that many highly-educated British citizens keen on a future in continental Europe are likely to migrate, based on OECD and Eurostat data.
The data shows that migration from the UK to EU countries increased by nearly 30%, compared to pre-Brexit numbers and the number of British citizens obtaining an EU member-state passport increased by more than 500% across the continent, and by more than 2000% in Germany.
The study, authored by Daniel Tetlow of Oxford-in-Berlin and Daniel Auer of WZB, reveals that Brexit has been the dominant driver of migration decisions since 2016, by comparison with stable migration flows of other EU nationals over the same period.
According to the study, the numbers of UK citizens obtaining EU member state passports provides evidence that an increasing number of UK immigrants are making long-term migration decisions to protect themselves from some of the negative effects of Brexit.
Auer said: “These increases in numbers are of a magnitude that you would expect when a country is hit by a major economic or political crisis.”
Since the 2016 referendum, the German Government has granted 31,600 British citizens German citizenship while allowing them to maintain their UK identity indefinitely.
“We’re observing a new social migration phenomena and a redefining of what it means to be British-European,” said Tetlow.
The study concludes that in the last 4 years, ‘collective uncertainty’ triggered by Brexit was and still remains powerful enough to alter migratory behaviour at scales comparable to the impact of a large-scale economic shock. (Courtesy: HT)