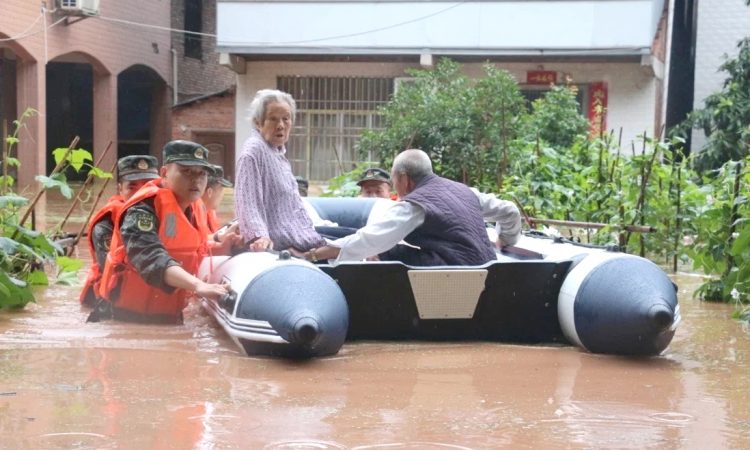 Thousands of residents in Dazhou have been evacuated from their homes. Photo: Weibo

Beijing, July 25: Typhoon In-Fa made landfall in China’s east Zhejiang province on Sunday, packing winds of up to 38 meters per second at its centre, while the death toll from the rain-triggered unprecedented floods in Henan province has risen to 63, officials said.

The typhoon, the sixth of this year, hit land in Zhoushan city’s Putuo district at approximately 12:30 PM, the local flood control headquarters said.
Weather authorities have forecast the typhoon will make a second landfall in coastal areas between Zhejiang’s Jiaxing city and Jiangsu province’s Qidong city on Sunday.
Meanwhile, the death toll in the July 21 unprecedented floods in Henan province climbed to 63 with five people still unaccounted for.
The death toll included 12 people who were killed when floodwaters inundated a subway metro train and a tunnel in the provincial capital Zhengzhou which was ravaged by the floods.
China’s military blasted a damaged dam to divert the surging waters of a flooded river after the heaviest rainfall in 1,000 years hit Henan.
The torrential rains have affected about three million people in Henan province and a total of 376,000 local residents have been relocated to safe places, according to the provincial emergency management department said.
The direct economic losses have gone up to 65.5 billion yuan (USD 10 billion), it said on Friday.
As Zhengzhou city of 12 million people limped back to normalcy, rescuers are assisting thousands of people caught in the floodwaters.
Zhengzhou was hit by several days of heavy rainfall, causing floods of an intensity not seen in decades.
Over 8,000 military personnel worked in 10 different danger zones around the city, the state-run Xinhua news agency reported.
Donation counters were set up around the city to distribute essential supplies after the panic-stricken residents bought supplies during the first days of the flood.
Fire crews toured the surrounding villages to help residents who have been injured or are trapped and were working throughout the day to drain the flooded roads.

Streets were turned into rushing rivers, washing away people and vehicles and apartments. Hundreds of cars washed away in floods have piled up in different parts of the city. (PTI)