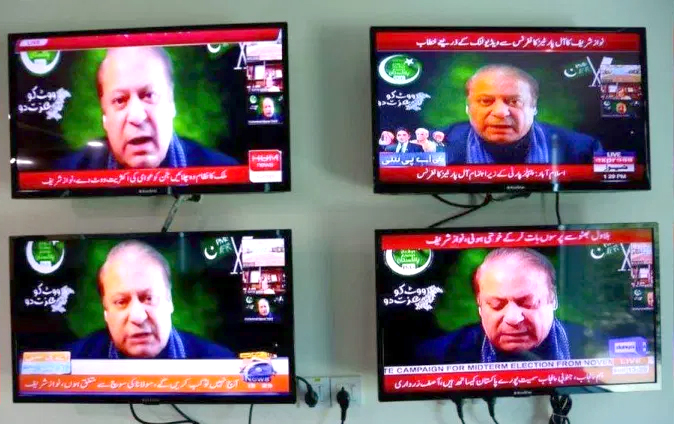 LONDON, October 21: Former Pakistan Prime Minister Nawaz Sharif has said that the overall situation in Pakistan is volatile and two parallel governments control the country.
He did not define these two governments but said; “A situation of ‘state above state’ exists in the country which creates confusion and is not in the interest of the nation and public.”
Talking to journalists outside the office of his eldest son Hussain Nawaz in central London on Tuesday, he said that whatever has happened in Karachi is enough to prove what “I had been saying for a long time.”
“There is no need to seek further proofs and evidence to prove the lawlessness in the country. Enough is enough. I never say a word without facts and figures. Whatever I say, it is based on facts and experience,” he said.
Referring to the arrest of his son-in-law Captain Safdar Awan at a five-star hotel in Karachi on Monday morning, Nawaz Sharif commented that everyone knows who picked him up from hotel room, who arrested him by force and who registered an illegal FIR against him. “These facts can’t be ignored easily”.
“Whatever happened and the way Safdar Awan was arrested is not and can’t be permissible in a civilised society and they have crushed all civilised norms. Every person who knows the facts would understand that whatever I had been telling in my previous four, five speeches are absolutely correct. No one would be in doubt at all now after this incident”, he added.
“They have destroyed democracy and democratic institutions, only God knows what would be the future of the country”, Nawaz Sharif commented.
The former prime minister who is now a convicted person and living in London for his medical treatment, went on to say that everyone is clear in his mind after watching the developments that occurred in the last few days and believes that he (Nawaz Sharif) speaks the truth and unveils the facts.
Nawaz Sharif also praised the Sindh police and termed the force as brave for lodging the protest against misbehaving and humiliation to IG Police. “Sindh police is an honourable force and their timely reaction and protest is a
beacon and good example for other institutions to follow”, he commented.
“The arrest of Safdar Awan is condemnable but more deplorable is that they violated the sanctity of privacy. This unethical and illegal action is not permissible in any religion and civilized society. They broke the lock and door of the room and entered inside where a lady was sleeping. Everyone knows who they were and who did this wrongful and illegal deed,” he said.
When he was asked about what may be the goals of this action, Nawaz Sharif said that only they themselves can reveal the real aims of this action.
“They are afraid why Nawaz Sharif is unveiling the facts and informing the people. I am not scared and will continue to tell the truth. This is my prime duty and will continue to reveal the facts”, Nawaz Sharif vowed.
Commenting on Sindh’s situation, the former prime minister said that the situation there has become worse and beyond control. “Police officers are leaving their jobs and no know knows now who will control the law and order situation in that province,” he said.
He smilingly addressed the newsmen, saying there is no point in talking to them as they will not publish or broadcast his conversation. PEMRA has barred Pakistani TV channels and newspapers from broadcasting or publishing the conversation of Nawaz Sharif as he is a “convicted offender”. (ANI)