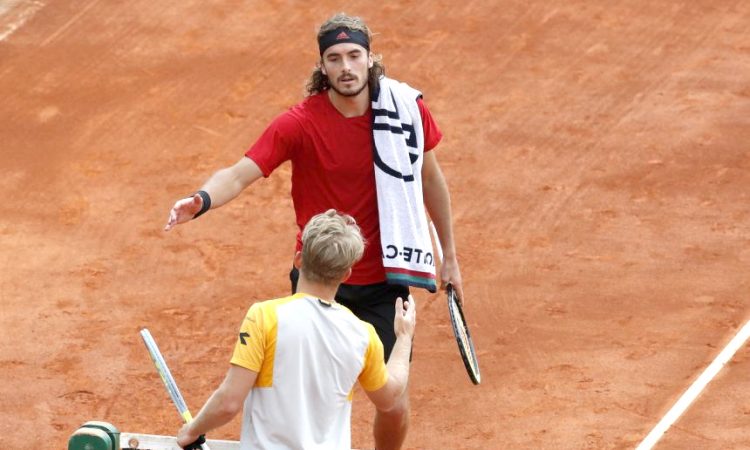 Stefanos Tsitsipas (top) shaking hands with Alejandro Davidovich after the latter withdrew from the match, at the Monte Carlo Masters on April 16, 2021.PHOTO: EPA-EFE

MONACO, April 16: Stefanos Tsitsipas advanced to the semi-finals of the Monte Carlo Masters on Friday when his quarter-final opponent Alejandro Davidovich withdrew after losing the first set 7-5.

Tsitsipas, the world number five, will play his sixth Masters 1000 semi-final on Saturday, and his first in the principality, against Belgian David Goffin or Englishman Dan Evans, the conqueror of Novak Djokovic.
Struggling with an injury to his left thigh, Spaniard Davidovich tried an underarm serve when facing set point. Tsitsipas pounced to hit a winning backhand return.
Until he was hurt, Davidovich gave his Greek opponent problems.
But at 3-3, Davidovich called for the doctor to treat his left thigh. He immediately managed the first break of the match, as Tsitsipas began to show signs of irritation, to the point of receiving a warning for swearing.
Tsitsipas immediately broke back and as Davidovich struggled, broke again to end the set and the match. (AFP)