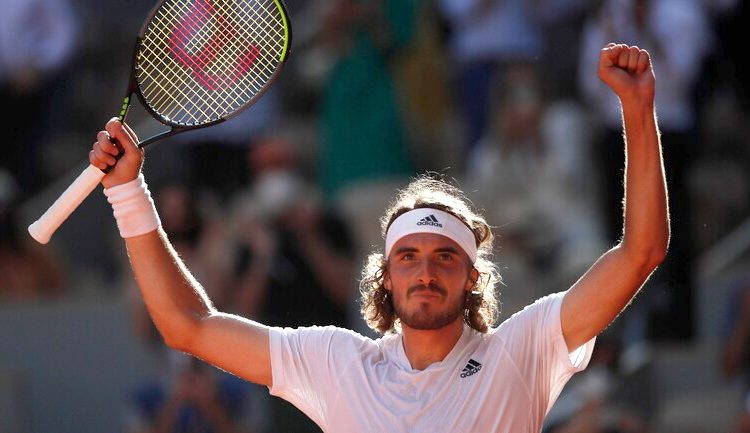 PARIS, June 11: Stefanos Tsitsipas became the first Greek player to reach a Grand Slam final on Friday when he defeated Germany’s Alexander Zverev in a bruising five-setter at the French Open.

Fifth-seeded Tsitsipas won 6-3, 6-3, 4-6, 4-6, 6-3 and will face either 13-time champion Rafael Nadal or world number one Novak Djokovic in the championship match.
However, the 22-year-old will have his work cut out on Sunday — he is 2-7 against Nadal and 2-5 playing Djokovic.
“All I can think of is my roots, a small place outside Athens where I dreamed to play on the big stage at the French Open,” said a tearful Tsitsipas on making his first final at the majors, secured on a fifth match point.
“It was nerve-wracking, so intense, I stayed alive. I went out there and fought. This win means a lot, it’s the most important one of my career so far.”
Tsitsipas took a 5-2 career lead over Zverev into the semi-final and he was the first to pounce with the only break of the opening set in the second game.
The rock-solid Greek didn’t give up a single break point although in an indication of the fine margins, Tsitsipas only hit one winner.
Zverev, bidding to become the first German man since Michael Stich in 1996 to reach the final in Paris, raced into a 3-0 lead in the second set.
However, Tsitsipas’ greater composure saw him rack up six consecutive games to move two sets ahead.
The Greek had come into the semi-final certainly sharper having seen off three seeded players to get this far.
Zverev had needed five sets to beat his 152nd-ranked compatriot Oscar Otte in the first round and hadn’t faced a player inside the top 45 before Friday.
But Zverev carved a break in the third game of the third set and this time backed it up despite a lengthy, foul-mouthed rant at the umpire over a disputed line call.
The 24-year-old German, now fired up, broke in the opening game of the fourth set and levelled the semi-final in the 10th game on the back of a brutal 27-shot rally.
Krejcikova, Siniakova advance to French Open doubles final
Barbora Krejcikova will try this weekend to become the first woman to sweep Roland Garros titles since Mary Pierce in 2000.
Krejcikova and fellow Czech Katerina Siniakova advanced to the doubles final with a 6-1, 6-2 win over Magda Linette of Poland and Bernarda Pera of the United States.
Krejcikova also made it to the singles final by beating Maria Sakkari 7-5, 4-6, 9-7 after saving a match point on Thursday. She will be up against Anastasia Pavlyuchenkova of Russia in Saturday’s title match.

The second doubles semifinal is pitting Bethanie Mattek-Sands of the United States and Iga Swiatek of Poland against Romanian Irina-Camelia Begu and Nadia Podoroska of Argentina. (AFP/AP)