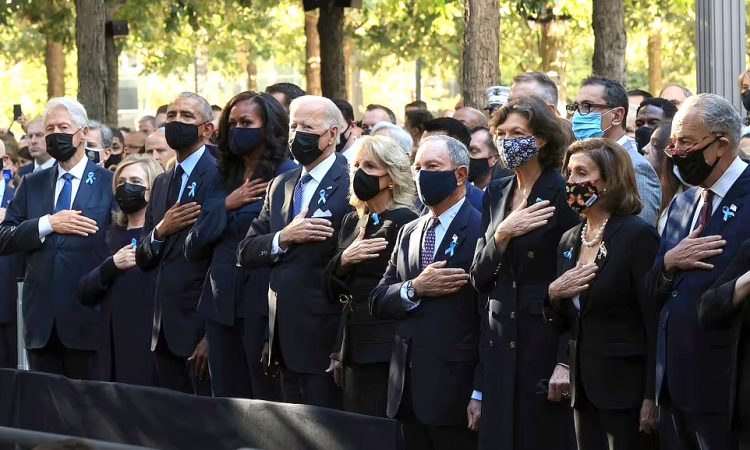 Biden travelled next to the Flight 93 memorial in Shanksville to attend a wreath-laying ceremony.
Earlier, former President George W Bush and Vice President Kamala Harris both spoke at the memorial.
Trump, instead of appearing at the ceremonies, travelled several blocks from his Trump Tower building in Manhattan to the 17th police precinct and the neighbouring fire station in New York City.
During an unannounced stop at a Shanksville Fire Department, Biden praised Bush for encouraging American unity in his speech.
He also defended his administration’s handling of the withdrawal from Afghanistan in brief remarks to the press pool.
Biden’s last stop in the day was the National 9/11 Pentagon Memorial, where he attended a wreath-laying ceremony along with first lady Jill Biden, Vice President Kamala Harris, Defense Secretary Lloyd Austin and Gen. Mark Milley, Chairman of the Joint Chiefs of Staff.
Biden did not deliver formal remarks on Saturday but released a video statement on Friday recognising the lives lost in the deadliest attack in US history and calling for national unity.
The September 11, 2001, attacks were a series of four coordinated terrorist attacks carried out by the Al Qaeda terror group.
Four commercial planes were hijacked by 19 Al Qaeda terrorists.
The first plane to hit its target was American Airlines Flight 11. It was flown into the North Tower of the World Trade Center complex in Lower Manhattan.
Seventeen minutes later, the World Trade Center’s South Tower was hit by United Airlines Flight 175.
Both 110-storey towers collapsed within an hour and 42 minutes, leading to the collapse of the other World Trade Center structures and damaging surrounding buildings.
The third plane, American Airlines Flight 77, crashed into the west side of the Pentagon causing a partial collapse of the building’s side.
The fourth jet, United Airlines Flight 93 which was flown in the direction of Washington, D.C., was the only one not to hit its intended target, instead crashing in a field near Shanksville, Pennsylvania.
It was later determined that Flight 93’s target was either the White House or the Capitol.

A total of 2,996 people were killed in the attacks, which were the deadliest in human history, with more than 25,000 others.
(Courtesy: TS)