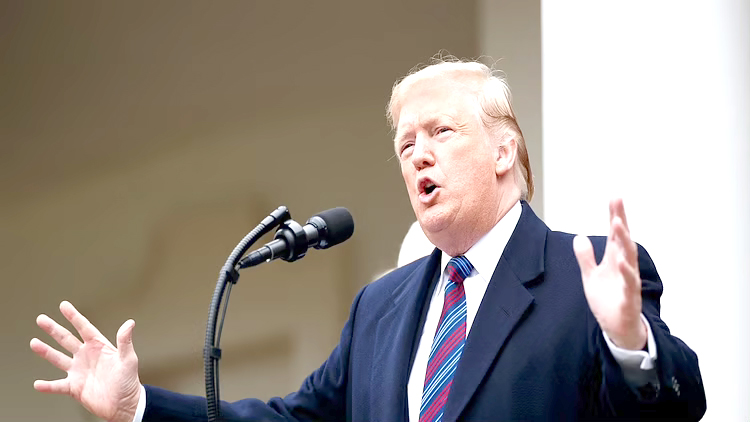 Milwaukee (US), October 28: US President Donald Trump has slammed the mainstream American media and big tech companies for blocking the alleged corruption charges against his opponent Democratic challenger Joe Biden.
They have accused each other of serious corruption charges during the election campaigning, with the president alleging that Biden got USD 3.5 million from Russia and it came through Russian President Vladimir Putin because he was very friendly with the former mayor of Moscow.
Biden has denied the allegations.
Trump, before leaving for a campaign trail on Tuesday, told reporters at the White House that the mainstream media was not showing corruption against Biden.
Nobody has ever seen anything like we’re witnessing right now. I think it’s a very sad time and it’ll go down as a very sad era for the media and certainly for big tech (companies).
I think what is going on with all of those companies — I think they’ve hurt themselves very badly because they’ve been so restrictive when they don’t want to show corruption, like you have with Biden — that’s totally corruption and everybody knows it — and they’re trying to protect, because he can make them wealthier, whereas they understand me, Trump said.
They understand where I’m coming from. It’s very unfair. Nobody has ever seen anything like it. It’s not freedom of the press it’s the opposite. And, of course, the media is in the same bag, said the president.
At a separate election rally in the battleground State of Wisconsin, his eldest son Donald Trump Jr alleged that the media and the big tech companies are now campaigning on behalf of Biden and the Democratic Party.
The mainstream media today is indulging in censorship, he said, alleging that they are not letting any negative news against Biden and his family getting out.
Your First Amendment is on the table. They will do everything they can to silence you. It is a point of no return, he said, accusing social media of backing Democrats.
The president’s son said that the Democratic Party no longer represents America’s hard-working men and women as it is now pushing the for socialism and Marxism.
Launching a scathing attack on the opposition party and Biden and his running mate California senator Kamala Harris, he urged the Republican supporters to help re-elect his father.
And when we win, we can not only make America Great Again’, but also we can make liberals cry again’, he told hundreds of cheering supporters in this small city of Wisconsin on Tuesday.
Trump Jr has been campaigning across the states, making multiple stops seeking vote for his father. Like his father, his talking points remains the same such as the achievement of the Trump administration, COVID-19, corruption and the left liberals that now dominate the Democratic Party.
He prominently compares himself with Biden’s son Hunter Biden, who has been facing serious corruption charges.
It is in this context that he launched a scathing attack against the mainstream media and the big tech companies who he alleges have double standards: one for the Trump family and the other for the Biden family.
Our freedom is under attack. The Democratic Party used to represent the hard-working men and women across the country. That Party is no more. That party is gone. We think of the things that they’re pushing these days. What other than socialism and Marxism? What are their priorities? It’s not that hard-working men and women of this country.
This is not your grand-parents Democratic Party. This is not your parents Democratic Party. It’s a party of AOC (Alexandria Ocasio-Cortez ), Rasheeda Talib, Nancy Pelosi and Kamala Harris. Who’s going to be in charge folks. You realise they want to use Joe Biden as the camouflage, he added. (PTI)