HomeTop StoriesTrump praises India’s unity in diversity, calls it an inspiration to the world
Top Stories
1 year agoFebruary 24, 2020No tags 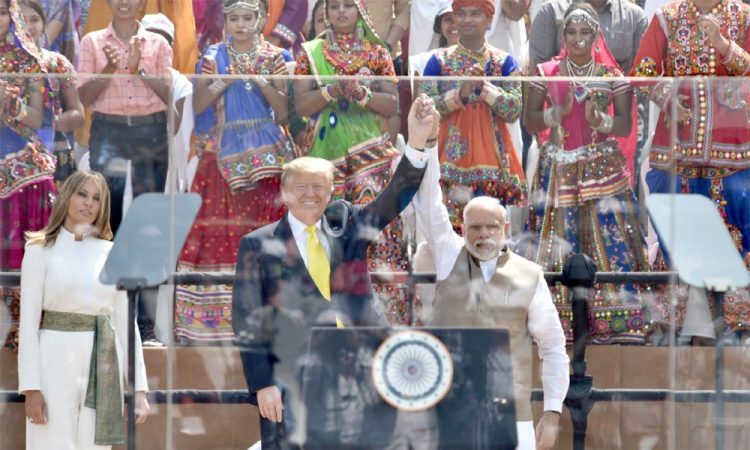 Ahmedabad, February 24: India embraces freedom, liberty, individual rights and the rule of law, and is admired around the globe as people of different religions worship side by side in harmony, US President Donald Trump said on Monday, lauding the country’s accomplishments during his maiden state visit here.
He noted that India has an incredible potential and Prime Minister Narendra Modi is laying the foundations of its future.
Hailing India’s diversity, the US President said its unity is an inspiration to the world as it is known for its democracy, tolerance and peace.
“India is a country that proudly embraces freedom, liberty, individual rights, the rule of law, and the dignity of every human being.
“Your nation has always been admired around the earth as the place where millions upon millions of Hindus and Muslims, Sikhs and Jains, Buddhists, Christians, and Jews worship side by side in harmony,” he said while addressing a packed Motera stadium at the ‘Namaste Trump’ event here.
“The story of the Indian nation is a tale of astounding progress, a miracle of democracy, extraordinary diversity, and above all, strong and noble people.
“India gives hope to all of humanity. In just 70 years, India become an economic giant, the largest democracy ever to exist and one of the most amazing asians anywhere in the world,” Trump said.
The potential for India is absolutely incredible, he said while noting that India’s rise as a prosperous and independent nation is an example for every nation all over the world and one of the outstanding achievements of the century.
It is inspiring because India has achieved all this as a democratic, peaceful and tolerant country, he said.
“There is all the difference in the world between a nation that seeks power through coercion, intimidation, and aggression, and a nation that rises by setting its people free and unleashing them to chase their dreams, and that is India,” Trump said.
“This is why India’s accomplishment over the last 70 years is completely unrivalled, no matter where you go. It is your faith in the strength of a free society, your confidence in your people, your trust in your own citizens, and your respect for the dignity of every person that makes the United States and India such a natural, beautiful, enduring friendship,” he said.
He also congratulated India for its six times growth of the economy since the turn of the century and said in a single decade, India has lifted over 270 million people out of poverty.
He lauded the achievement of every village in India having access to electricity under Prime Minister Modi.
Trump also talked about 320 million people being connected to the internet and the double pace of highway construction and over 70 million households having access to cooking fuel, 600 million more people having access to basic sanitation.
“Incredibly 12 Indian citizens are lifted out of extreme poverty every single minute of every single day,” he said, adding that India will soon be the home of the biggest middle class anywhere in the world and would completely eradicate poverty within less than 10 years.
The US President quoted Swami Vivekananda who had said, “The moment I stand in reverence before every human being, and see God in him, that moment I am free.”
“Where you speak more than 100 languages, and come from more than two dozen states, yet you have always stood strong as one strong Indian nation.
“Your unity is an inspiration to the world and in America,” he said adding the Americans have seen the splendour of Indian culture personally through the over 4 million Indian-Americans living in the United States.
“Our two national constitutions both begin with the same three beautiful words: ‘We the people’. That means that in America and India alike, we honour, respect, trust, empower, and fight for the citizens we proudly serve,” Trump later tweeted.
Trump thanked India for the contributions its culture and traditions have made to the United States and said Americans are eager to strengthen ties between their people.
“You have come so far but it is nothing compared to how far India will go into the future and the Prime Minister is laying the foundation for a future like few other countries can even think of.
This nation is blessed with many treasures – from the sacred banks of the Ganges to the Golden Temple and the Jama Masjid, it is the home to some of the most cherished heritage anywhere on earth, he said.
He said India has always been a wellspring of deep wisdom and great ideas from the Vedas and the ancient epics all the way to the modern Indian nation.
“But standing before all of you today, I know that the true strength of India is not found in its text books, its landmarks, or its landscapes,” he said, while noting that the courage of Indians won and secured its independence.
“Your devotion built this great and enduring democracy. And it is your dreams that will power this country to a future with even greater progress, prosperity, equality and opportunity for every citizen across your land.
“So, today I say to every Indian, north and south, Hindu or Muslim Jewish and Christian, rich and poor, young and old, take pride in the glories of your past, unite for an even brighter future, and let our two nations always stand together as powerful defenders of peace and liberty. And the hope of a better world for all of humanity,” Trump said. (PTI)