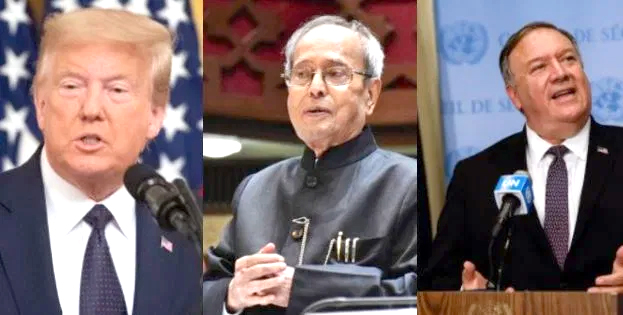 Washington, September 2: President Donald Trump and Secretary of State Mike Pompeo have condoled the demise of former president Pranab Mukherjee, terming him a “great leader” whose “visionary leadership” helped India’s rise as a global power and paved the way for a stronger US-India partnership.
Mukherjee died on Monday evening following a 21-day battle with multiple ailments. He was 84.
The long-time Congress leader and seven-time parliamentarian had tested positive for COVID-19 when he was hospitalised and was being treated for a lung infection. He suffered a septic shock on Sunday due to it. Doctors said he died of a cardiac arrest.
“I was saddened to learn of the passing of India’s former President, Pranab Mukherjee, Trump tweeted on Tuesday.
“I send my condolences to his family and the people of India as they grieve the loss of a great leader,” he said.
Earlier, Pompeo said that the United States was deeply saddened to learn about the passing of Mukherjee.
In a distinguished career spanning more than half a century, Mukherjee worked tirelessly on behalf of the people of India as a parliamentarian, cabinet minister, and as the president of the world’s largest democracy, Pompeo said.
“His visionary leadership helped drive India’s rise as a global power and paved the way for a stronger US-India partnership, he said.
“President Mukherjee’s many accomplishments resulted in a more prosperous and secure India. As Minister of External Affairs and Defense, he championed the landmark US-India Civil Nuclear Agreement, a foundation of the US-India strategic partnership, and signed the Defense Framework Agreement to enable the US-India security relationship we witness today,” Pompeo said.
“Few Indian statesman played a more vital role in preparing India for the mantle of global leadership in the 21st century. On behalf of the American people, we extend our deepest condolences to the people of India and to President Mukherjee’s family during this time of mourning,” he said in his statement.
Mukherjee is survived by two sons and a daughter. His son Abhijit Mukherjee was the first to break the news of the death of the veteran politician. (PTI)