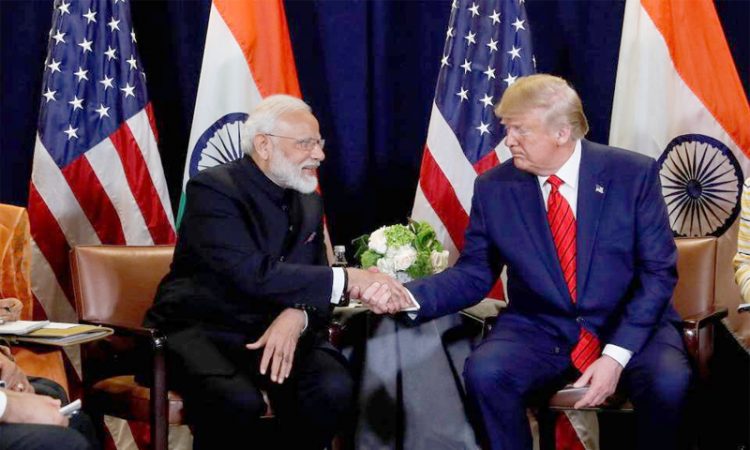 WASHINGTON, September 24: US President Donald Trump on Tuesday said he expected Prime Minister Narendra Modi to “take care” of the terrorism problem in the region and the Kashmir issue, effectively endorsing New Delhi’s position that bilateral matters with Pakistan brook no third party mediation.
“I know that your Prime Minister will take care of it … you have a great Prime Minister and he will solve the problem, I have no doubt about it,” Trump said in brief remarks before a bilateral meeting on the sidelines of the UN General Assembly.
Asked what message he wanted to give Pakistan considering its Prime Minister Imran Khan had admitted that the Pakistani army and intelligence agency ISI had trained al-Qaida and other terrorist groups, Trump said, “The message is not for me to give … it is for Prime Minister Modi to give, and he gave it loud and clear. I am sure he will be able to handle it.”
Trump was referring to what he earlier described as Modi’s “very aggressive” statement on Kashmir that he said was very well received by 59,000-strong crowd at the NRG stadium in Houston. The US President once again referred to the Houston rally in glowing terms, comparing the response Modi got to an Elvis Presley concert and saying it was “as if Elvis had come back.”
“They love this gentleman … they went crazy.” Trump said.
Trump also gave a massive endorsement for Prime Minister Modi’s handling of national affairs in India, calling him a “father figure.” He said he recalled India as a place of strife and dissent before Modi came along, and the Prime Minister had brought the nation together like a father would a family.
“He brought things together like a father … you don’t hear about dissension any more,” Trump said.
It was an astonishing show of across-the-border political support for a leader who is regarded by many as a polarizing figure, just the way Trump is also seen.
Trump’s remarks virtually put a stamp of approval on India’s and the Modi government’s move to better integrate Jammu and Kashmir with the Indian union, leaving the external and internal situation for Prime Minister Modi to handle.
The US President though declined to embarrass Pakistan even more publicly by saying he had not heard Imran Khan admit to Pakistan training al-Qaida and other terrorist groups. “But I know your Prime Minister will take care of it,” he added.
Trump’s remarks were a devastating blow to Pakistan, which only hours before had exulted over the US President’s remarks offering mediation, although he qualified it by saying that would happen only if India consented.
Still, he urged India and Pakistan to get together and talk, saying if these two gentlemen (Modi and Imran Khan) got together and got to know each other, they could “do something.”
Earlier, greeting the US President, Prime Minister Modi sought to put the national relationship above personal ties, saying, “I am thankful to Trump that he came to Houston. He is my friend, but he is also a good friend of India.”
But Trump gushed not just about the Houston rally but also about Modi and their personal chemistry, saying “it is as good as it gets” and he that he also has “great respect and great admiration” for the Indian Prime Minister. He topped it off by referring to him as a father figure. (TNN)