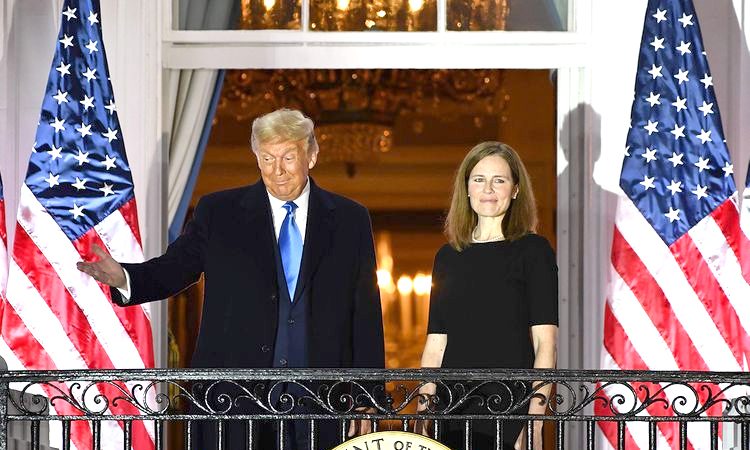 US President Donald Trump gestures next to Judge Amy Coney Barrett after she was sworn in as a US Supreme Court Associate Justice during a ceremony on the South Lawn of the White House October 26, 2020, in Washington, DC. Image Credit: AFP

WASHINGTON, OCTOBER 27: US President Donald Trump hailed his nominee Amy Coney Barrett’s confirmation Monday to the Supreme Court as “a momentous day for America,” in a ceremony coming just 8 days before the presidential election.
“This is a momentous day for America, for the United States Constitution and for the fair and impartial rule of law,” the President, standing alongside Barrett, said before beaming lawmakers and others who had gathered on the South Lawn of the White House.
“I stand here tonight, truly honored and humbled,” Barrett, a 48-year-old religious conservative, said shortly after Supreme Court Justice Clarence Thomas administered the constitutional oath.
The US Senate confirmed conservative jurist Amy Coney Barrett as the Supreme Court’s newest Justice Monday, delivering President Donald Trump a landmark win just 8 days before the election.
The deeply divided chamber voted 52 to 48, largely along party lines in the Republican-controlled Senate, making Barrett the third Trump nominee to reach the high court and cementing a 6-to-3 conservative majority.
Republican lawmakers broke into applause as the tally was read out, and the White House is also expected to celebrate the confirmation in the final run-up to the November 3 election, in which more than 60 million Americans have already voted.
Immediately after the vote the White House announced that Trump would attend a “swearing-in ceremony” for Barrett on the mansion’s South Lawn, where she will take an oath to uphold the US Constitution.
Chief Justice John Roberts will administer the judicial oath on Tuesday at the Supreme Court, formally inaugurating her term on the Bench.
Barrett, a 48-year-old religious conservative, replaces late justice Ruth Bader Ginsburg, the liberal icon and women’s rights advocate who died on September 18 at age 87.
(AFP)