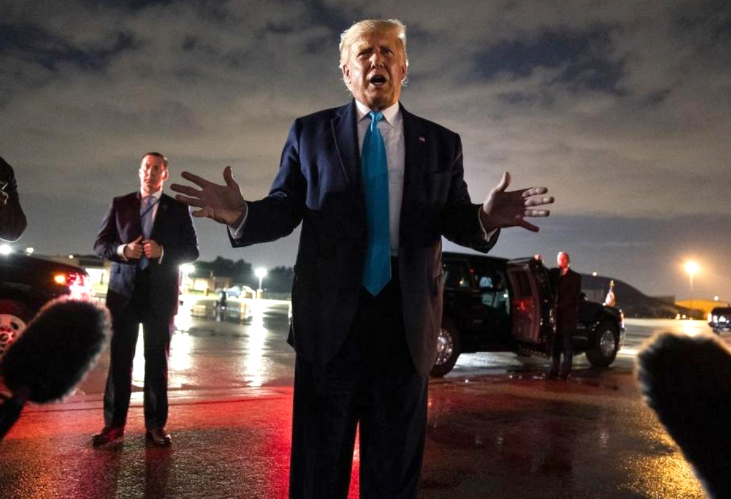 WASHINGTON, SEPTEMBER 5: President Trump heatedly denied on Thursday night that he referred to American soldiers killed in combat during World War I as “losers” and “suckers”, moving quickly to avoid losing support among the military and its allies just 2 months before an election.
Marching over to reporters under the wing of Air Force One after returning from a campaign rally, a visibly angry Trump rebutted a magazine report that he decided against visiting a cemetery for American soldiers in France in 2018 because he feared the rain would mess up his hair and he did not believe it was important to honour the war dead.
“If people really exist that would have said that, they’re lowlifes and they’re liars,” Trump shouted above the noise of the plane’s engines.
“And I would be willing to swear on anything that I never said that about our fallen heroes. There is nobody that respects them more.”
He added, “What animal would say such a thing?”
The report in The Atlantic magazine by its Editor-in-Chief, Jeffrey Goldberg, attributed the episode to “4 people with firsthand knowledge of the discussion that day”,
but he did not name them. During a conversation with senior officials that day, according to the magazine, Trump said: “Why should I go to that cemetery? It’s filled with losers.”
On the same trip, the article said, he referred to American Marines slain in combat at Belleau Wood as “suckers” for getting killed.
The article also said that Trump’s well-known antipathy for Senator John McCain, the Republican from Arizona and Vietnam War hero, was on display after the Senator’s death in August 2018. “We’re not going to support that loser’s funeral,” the article quotes Trump telling his staff. He became furious at seeing flags lowered to half-staff. “What the f*** are we doing that for? Guy was a f****** loser,” the President told aides, according to the article.
The report could be problematic for Trump because he is counting on strong support among the military for his re-election bid.
He has made his backing for increased military spending, troop pay raises and improved veterans care pillars of his campaign at the same time he boasts of ratcheting down “endless wars” in Afghanistan and Iraq.
But he has also clashed with the military leadership by extending clemency to accused and convicted war criminals, seeking to order active-duty forces into the streets of Washington to crack down on demonstrations and trying to block an effort to change the names of army bases named for Confederate generals.
A new poll by The Military Times taken before the party conventions last month and released this week showed former Vice-President Joseph R Biden Jr leading Trump with 41% to 37% among active-duty troops, a stark departure from the military’s longstanding support for Republicans.
People familiar with Trump’s comments say he has long scorned those who served in Vietnam as being too dumb to have gotten out of it, as he did through a medical diagnosis of bone spurs in his heels. At other times, according to those familiar with the remarks, Trump would marvel at people choosing military service over making money.
Biden, the Democratic presidential nominee, sought on Thursday night to capitalise on the Atlantic article, quickly issuing a statement condemning the President and saying it demonstrated that Trump was not fit for the office.
Biden said the article, if true, showed “another marker of how deeply President Trump and I disagree about the role of the President of the United States”.
“I have long said that, as a nation, we have many obligations, but we only have one truly sacred obligation ~ to prepare and equip those we send into harm’s way, and to care for them and their families, both while they are deployed and after they return home. That’s the foundation of what Jill and I believe,” said Biden, whose late son, Beau Biden, served overseas. (NYTNS)