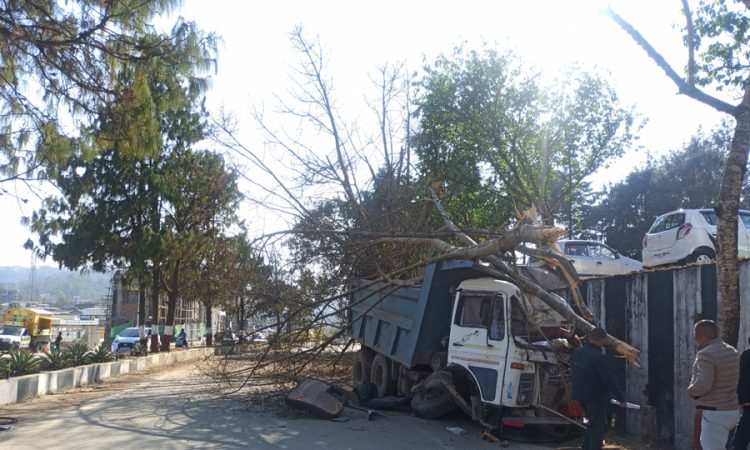 Could have been fatal if not for intervention of IRB personnel, says local taxi driver
KOHIMA, FEBRUARY 9: A heavy vehicle (dumper truck) bearing registration number RJ O9 GB-6969 met with an accident at Nagaland Civil Secretariat Road, Kohima on February 9. Personnel of 11th IRB C-Coy, present at the site, informed that there were five occupants in the vehicle but only four of them were seriously injured.

CRPF personnel stationed at the Secretariat said that they heard a loud crash at around 4:40 am.
The nature of the crash was such that the doors were jammed shut and they could not extract the occupants without the assistance of tools. It was only around 5 am when the IRB personnel stationed just below the road also arrived at the scene.
“All the doors were jammed and deformed in such a way that the occupants of the vehicle could not get out. Therefore, we had to make use of crowbars to evacuate the occupants,” said one of the IRB personnel.
Also present at the scene was Besuhvoyi Keroh, a regional taxi driver, who had reached the spot at the same time as the IRB personnel. He informed that the first two occupants who got out of the vehicle were taken to Naga Hospital Authority Kohima in his car.
Later, the IRB personnel were able to evacuate the remaining occupants. They were also taken to the same hospital on the IRB bus since it was the only transportation available at the moment.
If it was not for the action of the IRB personnel, some of them might have lost their life, Keroh shared. (Page News Service)