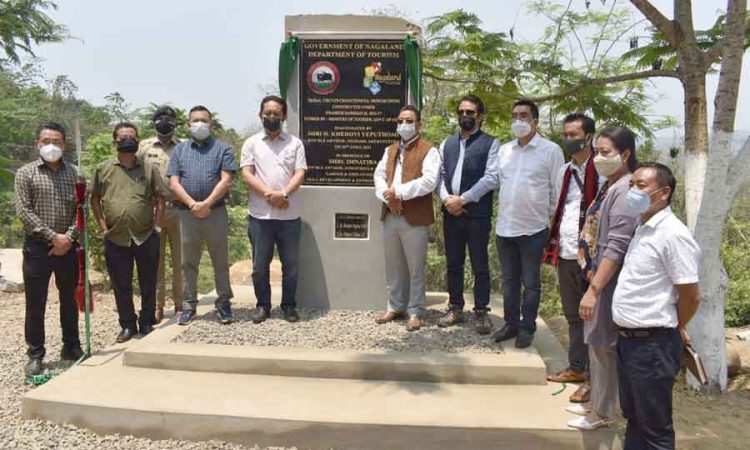 Dimapur, April 30: Tribal Circuit at Changtongya Mokokchung was inaugurated by Advisor for Tourism, Art & Culture, H. Khehovi Yeputhomi in the presence of Advisor for Industries & Commerce, Labour& Employment, Skill Development & Entrepreneurship, Imnatiba on April 30. The project is constructed under SWADESH DARSHAN 2016-17 funded by Minister of Tourism Government of India.

Speaking on the occasion, Advisor H. Khehovi Yeputhomi said that a good leader is an asset for the public and appealed to all to co-operate with the present Advisor for overall development of the area. He further said that with the inauguration of the tourist circuit, the area has the potential to be a tourist destination and encouraged all to make the area into a rural eco-adventure and cultural tourist spot, which will generate income and create employment opportunity for the unemployed youth.
He thanked Advisor Imnatiba and his family members for donating the land in their grandfather’s name, Takanukshi.
Advisor Imnatiba said that the inaugural is a landmark achievement for the people of the area. He expressed his gratitude to Advisor H. Khehovi for his initiative to complete the project in time and also assured to the department to make full use of the place, for the benefit of the public.

The inaugural programme was chaired by Addl. Director Tourism, Kedousie-u Metha. Technical remark was given by Er. S. HutokaSema. Vote of thanks was delivered by Imtisenla Tourist Officer Mokokchung. (Page News Service)