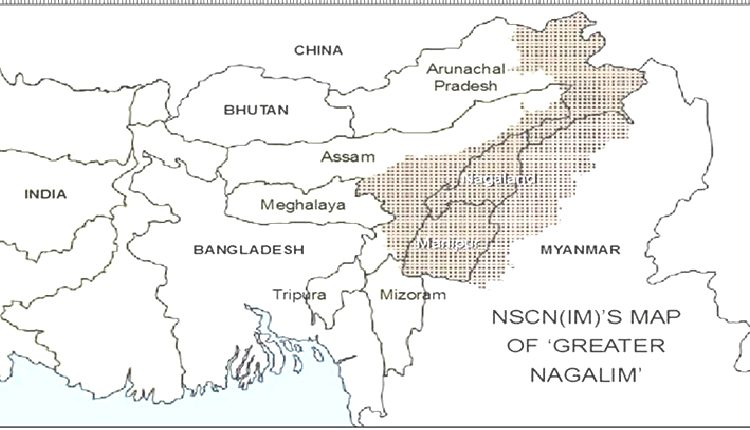 NSCN(IM) has been demanding the creation of a Greater Nagalim that includes large areas of Assam adjoining Nagaland, most of Manipur's hill districts, Tirap, Longding and Changlang districts of Arunachal Pradesh, and parts of Myanmar. (IE)

Dimapur, July 1: Breaking its silence for the first time on the statement made by Chief Minister Niphiu Rio on July 12 last that “integration of Naga inhabited areas would not be possible under the current situation,” the NSCN (IM) on Sunday made its stand clear that the issue of integration of all the Naga territories is an integral part of the ongoing Indo-Naga political dialogue.
“Naga territories which have been kept apart arbitrarily and indiscriminately by the British in the first place and then further divided between Burma (now Myanmar) and India under Nehru without the knowledge and consent of the Naga people is totally unacceptable. Just as there cannot be a kingdom without territory, so the Indo-Naga political talks sans integration of all the contiguous Naga areas will be a futile exercise,” it said in a statement.
Terming the Chief Minister’s statement as “irrational and irresponsible” and nothing but a direct challenge to the Naga national cause, the NSCN (IM) asked, “Who is he to barter the legitimate rights of the Nagas in the open market for personal glory? Whom is he trying to please by surrendering the history and the legitimate right of the Nagas? Such a treacherous attempt to enhance personal political ambition at the expense of the Nagas’ right is a deliberate insult to the Naga people’s sentiment.”
The NSCN (IM) reminded that in recognition of the Nagas’ history and situation as unique by the Government of India, the historic Framework Agreement was signed on 3rd August, 2015 between the GoI and the NSCN. Both the parties agreed and recognized that integration of all the contiguous Naga areas is the legitimate right of the Naga people and it is mutually agreed that it will be pursued through earnest political democratic process, it stated.
“Now, after 21 years of negotiations, India and Naga people are prepared to finalize the political dialogue to its logical conclusion and resolve the oldest political problem in the entire South East Asia. At this crucial juncture, any attempt to undermine or disturb the peace process without being able to make head or tail of the negotiation shall no longer be tolerated,” it warned.
Declaring that Nagas will stand their ground to the last come what may, the NSCN (IM) said the hard earned political achievement has come at the cost of untold sufferings and supreme sacrifices rendered by thousands of Naga sons and daughters, and therefore no individual or organization is licensed to talk cheaply on the history of our people.
“It is pertinent to state that Nagas wherever they are, think and speak as one political language. It is time for the Nagas to be vigilant and alert to distinguish between what is true and false.
“The greatest challenge before us today is to remain truthful, and committed to the historical decision. Remember, morning shows the day, but the end is counted. We will stand to the end; we will not compromise our historical rights for one’s positions, power and to please the enemies,” it said while also declaring that Nagas shall not remain silent spectators against any divisive forces within or without, who tries to betray the Naga cause and their history. (Page News Service)