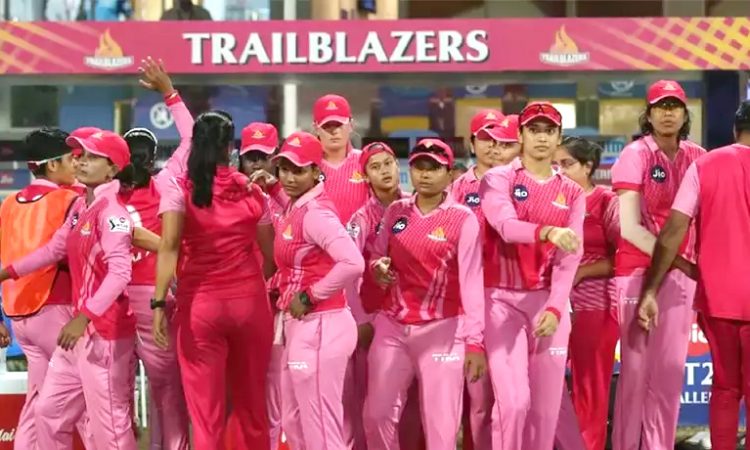 Sharjah, November 9: In a match where spinners called the shots, captain Smriti Mandhana’s knock proved to be the difference between the two teams as Trailblazers toppled Supernovas by 16 runs to lift their maiden Women’s T20 Challenge trophy in Sharjah on Monday.
Chasing 119, Supernovas’ batters were choked for runs and under the pressure to keep the scoreboard ticking, they lost wickets.
Propelled by the big occasion with the trophy in sight, Mandhana (68 off 49 balls) led from the front as she helped the Trailblazers set up a stage from where they could post a challenging target for the Supernovas. But her good work was put in shade by perky left-arm spinner Radha Yadav who claimed a five-wicket haul to help Harmanpreet Kaur’s outfit restrict Trailblazers to 118/8.
The runs dried out and wickets fell in clumps after Mandhana perished in the 15th over, courtesy flawless glovework by Taniya Bhatia who dislodged the stumps just in the nick of time to ensure spinner Shashikala Siriwardene had her first scalp.
Radha wreaked havoc in the 18th and the 20th over when she dismissed Deepti Sharma, Richa Ghosh, Sophie Ecclestone, Harleen Deol and Jhulan Goswami, leaking only 16 runs in 3.5 overs.
Earlier, made to bat first, the run barrage started in the second over bowled by off-spinner Anuja Patil. The left-hand bat Mandhana first went down the wicket, then swiveled it towards backward square to score consecutive boundaries before loosening herself for a hoik over long-off that went for a six. Just like her demeanor, Mandhana’s batting oozes elegance and her knock in the final was another testament of her superior skill as a batswoman.
The captain’s opening partner Deandra Dottin (20 off 32 balls), who usually likes to play the aggressor, looked restricted and failed to find the flair. But, holding one end up, she ensured no wickets fell till the 12th over. Dottin’s resistance ended after she attempted to slog sweep leg-spinner Poonam Yada and holed out at the mid-on giving an easy catch to Radha. (TNN)
Brief Scores: Trailblazers 118/8 in 20 overs (S Mandhana 68, D Dottin 20; R Yadhav 5-16) defeated Supernovas 102/7 in 20 overs (H Kaur 30; S Khatun 3-18, D Sharma 2-9) by 16 runs.