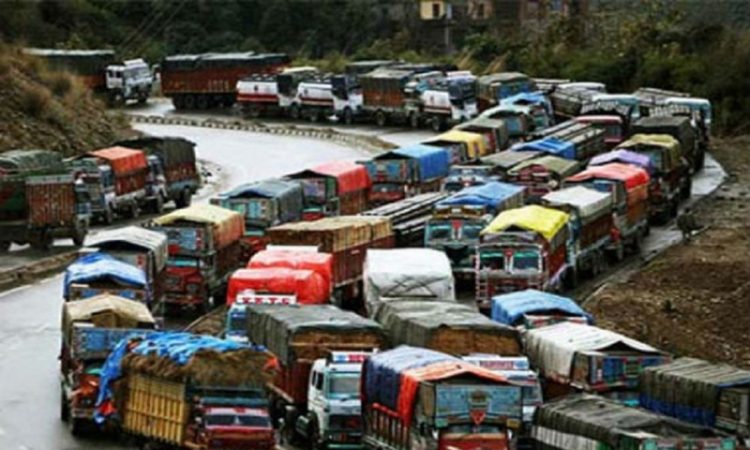 Silchar/Aizawl, November 10: Movement of vehicles between Assam and Mizoram stopped again amid tension in the areas along the inter-state border, a senior official said on Monday.
Locals in Lailapur have stopped the movement of vehicles to Mizoram on security grounds, said Bhanwar Lal Meena, the superintendent of police of the Cachar district in Assam.

There has also been no movement of vehicles from Mizoram to Assam since Monday night, he said.
The situation, though tense, is under control with no untoward incident reported since Saturday, he added.
“The situation along the inter-state border is under close watch,” the officer said.
A senior Mizoram government official said that Assam was not respecting the decision taken at the meeting, chaired by Union Home Secretary Ajay Kumar Bhalla, between the chief secretaries of the two state to ensure movement of traffic.
At the meeting held on Sunday, it was decided that Mizoram will partly withdraw its forces from the border areas and deploy BSF personnel, while Assam will ensure that the blockade on NH-306 on its side by the Lailapur residents is lifted.
“We have done all on our part. Our forces have been withdrawn and BSF personnel deployed at the disputed areas.
But, Assam is not respecting the mutual decision as only a few vehicles were released till Tuesday,” the Mizoram official said.
However, the Cachar SP said that he has no information about whether Mizoram has started the process of withdrawing its police force “from Assam’s territory”.
The Mizoram official said that a few personnel of the state forces are in the disputed areas to provide security to the Mizo people till normalcy returns.
Citing that only about 40 vehicles have entered Mizoram from Assam since Monday, the official said, “We don’t know what exactly happened there (Assam).”
Mizoram’s Deputy Inspector General of Police (Northern Range) Lalbiakthanga Khiangte claimed that till Tuesday evening, total 192 vehicles, including 174 heavy trucks, were released from Mizoram and entered Assam.
BSF personnel were deployed at Vairengte, Saihapui ‘V’ and Thinghlun villages where the border standoff took place recently, he said.
Traffic movement between the two states began on Monday after the blockade on National Highway-306, the lifeline of Mizoram, was lifted after 12 days.
During the day, over 150 women staged a peaceful procession between Phainuam Buarchep and Saihapui ‘V’ village in protest against the “economic blockade” and alleged aggression by Assam.
The protesters shouted slogans such as “We live in our land”, and “We will stand for Mizoram till death”.
Mizoram’s People’s Conference Party president Lalhmangaiha Sailo alleged that the Centre was giving prejudicial treatment to Mizoram as it did not take concrete steps to lift the blockade.
Meanwhile, police in Assam’s Hailakandi district arrested 21 activists of the Krishak Mukti Sangram Samiti (KMSS) for blocking the movement of a freight train to Mizoram at Muhammadpur railway station in the Lala police station area.
They put up barricades on the railway tracks to stop the movement of a Mizoram-bound goods train in protest against the alleged “aggression” by the neighbouring state, Hailakandi SP Pabindra Kumar Nath said. (PTI)