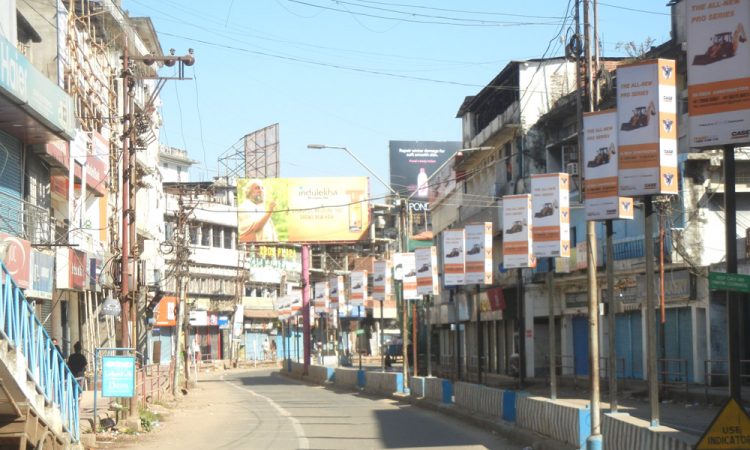 A deserted street during Dimapur bandh on Monday

Dimapur, December 10: Trade and business activities came to a standstill during the 12-hour Dimapur bandh called by Public Action Committee under the aegis of Naga Council Dimapur on Monday, even as financial transactions were affected due to closure of banks.
The PAC had called the bandh protesting against multiple taxation, extortion, abductions etc in Dimapur, which has severely affected the business community and the general public.
It may be mentioned that after the firing incident at a Honda Showroom on November 20 last by unidentified people, the PAC had demand immediate arrest of the people involved in the incident and warned that it would call for Dimapur bandh, if the culprits are not arrested.
The PAC may claim that the bandh was successful as it was total and peaceful, but one should not forget the initiative of Dimapur police who came out in numbers to help tourists and others who arrived Dimapur by train or flight. The Tourist Police and police escort vehicles stationed at both places helped travelers to reach their destination without any hassles.
But there were many at Dimapur Railway Station, who remained stranded till late afternoon as they could not avail any transport facilities during the day, except few who took advantage of the services provided by the Tourist Police to escort them to their destinations.
The total bandh and restriction on movement of private vehicles and pedestrians caused lots of inconveniences to the people, who needed to travel to different places at appointed time. School students appearing exams had to walk to their exam centres as they could not find any means of transport.
The arrangement of buses and other transport vehicles at Dimapur Airport, besides the police escort team gave relief to travelers who arrived Dimapur by Air India and Indigo flights Monday noon. Tourists who wanted to go to Kohima were escorted by police beyond Chumukedima where there was no bandh, while those travelling to nearby Assam were escorted to New Field Check Gate and Dillai Gate. Many passengers were dropped by the police team in their respective colonies/homes.
While the PAC justified the bandh during the festive season as cases of extortion and illegal taxations are rising, social media users were prompt to criticize the decision of the PAC to call for bandh at this hour. Some even stated that the bandh should continue for a month if people want a solution to the problems of extortion and illegal taxation.
Meanwhile, the Public Action Committee has expressed gratitude to all the 19 tribal hohos and frontal organizations for extending full support toward the bandh. It thanked all well wishers, tribal hoho leaders, volunteers, unions, organizations and Churches for their participation in physical, donation in cash and kind, prayer support etc. It also thanked the police and district administration of Dimapur for cooperation.
The PAC further thanked all the citizens of Dimapur for extending full support towards the bandh, while expressing regret to travelers, tourists, attendants of patients and all affected by the bandh.
It reiterated that the bandh was neither politically motivated nor it was for the interest of any individual but it was to send a strong message that the public is tired of the unabated multiple taxation, extortion, kidnappings happening in Dimapur. (Page News Service)