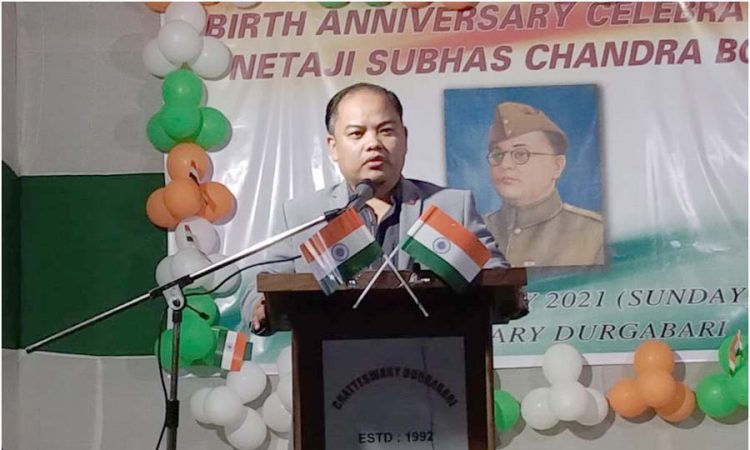 DIMAPUR, JANUARY 24: Advisor of Power Tovihoto Ayemi on Sunday said that post-independence, Netaji Subhash Chandra Bose never received the recognition he deserved, and none of the past governments have given him the honour which NDA government under the leadership of Narendra Modi has bestowed upon the leader.

Speaking as the special guest during the during the celebration of the 125th birth anniversary of Netaji here at Chatteswary Durgabari in Dimapur, Ayemi said that Netaji’s ‘parakram’ put India on the expressway of freedom, and the formation of Indian National Army shook the British government. He said that each aspect of the great leader should be celebrated.
Referring to when Netaji had set up an INA camp at Ruzazho at Phek in April-May 1944, Ayemi narrated the events that unfolded and how the entire village put their trust on him and arranged the things required.
“Netaji was an educator, writer, journalist, commander and military man,” Ayemi said, adding that his sacrifices for the nation is unparalleled and his birth anniversary will now be celebrated in a befitting manner annually while this year, it will be a yearlong event reaching every nook and corner of the country.
Calling Netaji a “true patriot”, and leader of the Nagas and the entire country, he said that there are many things that can be learnt from Bose and Nagas are fond of him.
Earlier, Dr. Er. Vekho Swuro, who is one of the members of the 80 member High Power Committee set up by the Government of India to celebrate the 125th birth anniversary of Netaji under the chairmanship of PM Narendra Modi, mentioned that his father Poswuyi Swuro, who is now 101-year-old, was appointed as ‘dobashi’ by Netaji himself upon reaching Ruzazho.
Swuro expressed his gratitude to Modi for declaring the birth anniversary of Netaji as “Parakram Diwas” and asked the gathering to extend support to the installation of a statue of Netaji in the vacant King George V Canopy near India Gate by signing the online petition launched by social activist Devdutta Maji, which had received more than 45,000 signatories as of January 23.
King George V canopy was built in the memory of George V, King of England by the British. It was constructed in 1911 when they announced the shifting of the capital from Calcutta (now Kolkata) to New Delhi. It housed a statue of the king of England. After India got independence, the statue was pulled down by the people. Since then it has been left empty.
“We need 1,00,000 signatories,” Swuro said.
On the cloud of mystery surrounding Netaji’s death, he claimed that the Justice Mukherjee Commission’s report suggested back in 1999 that Netaji didn’t die in a crash, but the former governments didn’t accept the report “but it will be now”.
The general secretary of Dimapur Naga Students’ Union, Mhajan Tsopoe said that the popular statement of Netaji, “give me blood and I’ll give you freedom”, has always intrigued him and it speaks so much about his patriotism and his love towards the people and nation.
Convener of Non-Naga communities and president of Dimapur Bengali Samaj, KK Paul said that to keep India intact, the people need to follow the legacy of Netaji and not others ‘who divided the country in a hurry to become the prime minister’.
President of Hindu Seva Samiti, Gopal Sharma also questioned that if Netaji had died in the plane crash, why were his friends and family being ‘spied upon even after years’ by the government of India.

Organised by Dimapur Bengali Students’ Union in collaboration with Chatteswary Durgabari and Hindu Seva Samiti, the programme started with the INA’s version of Tagore’s “Jana Gana Mana” which was rewritten by Netaji with the help of Mumtaz Hussain, a writer with the Azad Hind Radio and ‘colonel’ Abid Hassan Saffrani of the INA. (Page News Service)