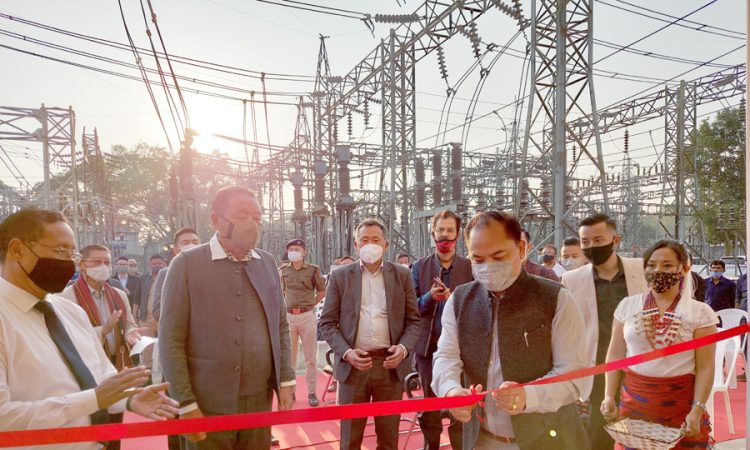 Speaking on the occasion, he said earlier one 100 MVA, 132/66kV transformer was approved by DoNER Ministry and to further improve the Power situation, the state Government had given fund from its own resources for installation of the second 100 MVA, 132/33 kV and technically both these two 100 MVA transformers have been made operations..
Dedicating the two transformers to the people of Nagaland, Tovihoto said it is yet another remarkable achievement of the Department of Power and expressed hoped that with the operationalization of two 100 MVA transformers, it would benefit the people of Dimapur and other districts.
On the occasion, he also thanked the engineers and people of the area for their support extended and enabling the Government to fulfil the vision of providing “uninterrupted power supply” all over Nagaland. He said it is the aim and priority of the Government of Nagaland to bring social and economic development all over the state by carrying out various developmental works such as improving power systems in the state. The objective of the Government is also to reach out to those who have remained socially, economically and educationally backward for several decades and since electricity is connected directly or indirectly with all other activities, he hoped that with the upgradation of 132/66/33 KV Sub-Station to 2 x 100 MVA at Nagarjan, the socio-economic conditions of the people would also improve considerable.
Admitting that the Department of Power is working under tremendous pressure with acute shortage of field staff, Tovihoto hoped that they would improve the overall maintenance of Power system in the state and display exemplary discipline and earn the admiration and support of the people.
He also urged the officers and staff of Power Department to work tirelessly and contribute for the overall improvement of the society and create a better tomorrow for the future generation.
While exhorting the staff of Power Department, the Advisor sought the support of the people of Dimapur and other parts of Nagaland to extend their fullest cooperation, especially in payment of electricity bills.
He also assured each and everyone that the Department of Power would do whatever is possible to improve the infrastructural gaps in the days to come.
Earlier, Principal Secretary (Power), Er KD Vizo said that domestic consumption constitutes about 85% of the total consumption. He said the trend over the last 10 years has shown an increase of 7 to 105 in the normal demand annually.
Er Vizo said by 2021, the Power demand of 200 MW is expected from the industrial activities in the state and therefore by 2021, the state Power demand would touch 450 MW. He suggested that a realistic approach towards development of power sector should be in place to handle the projected demand in all the sectors such as generation, transmission, distribution, power procurement plan, etc.
He disclosed that the bulk of state Power requirement is being purchased from the Central PSU generating units operating in the Northeastern Region and Eastern region. Currently there is shortfall of Hyrdo Power generation in the Eastern region hence the Department is rationing the supply of electricity throughout the state on a rotational basis and there is now tremendous pressure to have our own Hydro power generation stations.
Er Viso further stated that the Department of Power has decided to come out with a Power Policy to turn around the Department of Power from a heavy loss making sector to a profit making one in the shortest possible time, introduce the latest state-of-the-art technologies to modernize Power distribution, transmission and generation systems. This policy also aims to improve the overall efficiency, transparency, accountability of the Department and achieve the goal of 24×7 Power for all, he added.

Stating that Dimapur district is consuming about 50% of the power consumption in the state and revenue leakage is also maximum in the area, the Principal Secretary appealed to colony leaders, GBs and concerned citizens to help the Department to check excessive power theft in Dimapur. He also appealed to the general citizens to learn how to conserve energy and reduce unnecessary usage.
Er. Shikato Sema, Engineer-in-Chief, Department of presented the technical report.
(Page News Service)