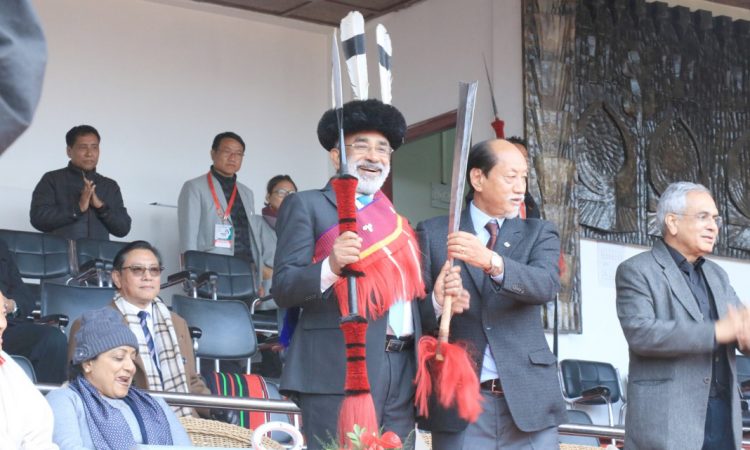 Says Nagaland is ‘God’s own paradise’

Kohima, December 5: Union Minister for Tourism, K J Alphons today stated that tourism is the future of North East India, particularly Nagaland. He opined that there may not be any other place under the Sun which is more beautiful than entire North East region of India.
In his maiden address on the fifth day of ongoing Hornbill Festival of Nagaland at Naga Heritage village Kisama, the Union Minister said “it is such a pride for the Nation that you all come together and celebrate the happiness, the diversity of the country and everything that is beautiful”.
Stating that Nagaland represents everything that is wonderful about the country — the colour, music dance, textile and food while it such a wonderful place, he said tourism is the future for Nagaland and the entire North East region.
“Kerala is God’s own land but this is God’s own paradise as such amazing people and hospitality will not be found anywhere in the world,” he said.
The Centre has sanctioned Rs 1351 crore for the NE as we believe that the North East is really the window to the East, because of which the Prime Minister’s policy ‘Look East’ is focused on the North East. For Nagaland, he said the Government has financed Swadesh Darshan project worth Rs 197 crore under the Tourism Ministry.
“If there is more interesting projects, we will be very happy to put in more money,” he said.
Considering the problems of connectivity, the Union Tourism Minister said that he had a talk with the Civil Aviation Minister on Wednesday morning for starting helicopter service from Guwahati-Dimapur-Kohima-Imphal and back.
The Ministry of Tourism will pay for the loss incurred by the service providers but improve the air connectivity, Alphons said.
Asserting that Government is determined to create the basic infrastructure which is necessary to push tourism in the region, he claimed, “we in the Modi government during the last four and a half years have done more than what has been done in the last 65 years for the people of this country”.
“We are spending more than 15 lakh crore on creation of infrastructure. We have electrified every village and now reaching with free electricity connection for the poor people while every poor citizen in India has an access to the medical facilities… they can walk into any private hospital and the government pays for it,” he said.
Is there any country which does that, but this country is doing that, he asked.
“We have immense possibilities and we would like to work with your government and people while the Hornbill Festival is the most beautiful thing that can be offered to the world,” he said.
This festival is one of the best festivals in the world and we are going to promote it on the global map to see millions of people witnessing the festival, the Minister assured.
Accompanied by his wife, the Union Minister during his maiden visit to the Hornbill Festival also graced the traditional Naga stone pulling ceremony commemorating the silver jubilee celebration of Northern Angami Youth Organisation at Chiephobozou coinciding with the Hornbill Festival.
He also inaugurated that Rhododendron Resort constructed under the Swadesh Darshan project of the Tourism Ministry at Phesama village just above Kisama Heritage.
The Union Minister along with vice chairman of NITI Aayog Dr Rajeev Kumar also witnessed the cultural performances of the various Naga tribes. Nagaland Chief Minister Neiphiu Rio and Advisor for Tourism, H Khehovi Yepthomi guided the Union Minister.
Over 97K tourists
The 19th edition of Hornbill festival has reached the half way with 97,551 visitors including 1,705 foreigners, 15,325 domestic tourists and 80,521 locals witnessing the first five day events at picturesque Naga Heritage Village, Kisama.
In the five days, Sunday (December 2) has seen the highest turn-out of 43,079 visitors while Tuesday (December 4) was least with 11,416 visitors. (Page News Service)