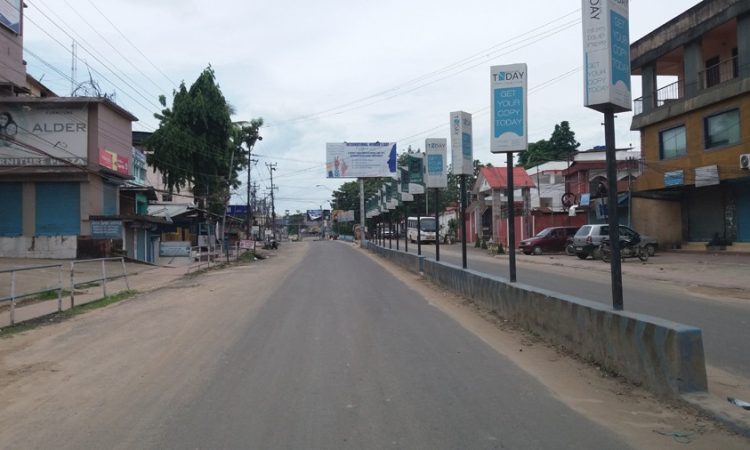 Kohima, April 28: Principal Director of Health & Family Welfare Department, Dr Kevichusa Medikhru today said that the steep rise of COVID-19 positive cases in Nagaland is because of “carelessness” of the people in general not adhering to COVID-19 appropriate behaviours.

The cases are increasing day by day because people are being careless and are not following COVID-19 appropriate behaviour and are moving around as though nothing has happened, while the steep rise is mostly because of the returnees, said Dr Medikhru while interacting with media persons here.
Talking specifically about the constant surge in Dimapur, he said total lockdown may be necessitated if detection of new cases continues to increase at the present rate.
Acknowledging that Dimapur is having daily increase because of random test in different places and also of returnees, he said the Department has asked Chief Medical Officers (CMOs) of other districts to also increase tests.
Few months back testing was done on demand but now we have moved to random testing, he said.
If our community can cooperate with the department there should not be much problem to fight COVID-19 as currently most resources are being spent on crowd controlling, he said.
He informed that sample collection of existing positive cases has been done and sent to Kolkata for genome sequencing to find if any mutant case exists in the State. It was sent on April 26 while the result is awaited, he said adding that the outcome takes minimum two weeks.
On the shortage of oxygen in the State, he said the State will be having 11 oxygen plants – three from PM Care and 8 from UNICEF and UNDP. He said currently there is no shortage of oxygen in the State as there are two oxygen refilling centres – one each in Dimapur and Kohima, which can fill up to 500 cylinders per day.
On availability of oxygen beds, he said Nagaland does not have big hospitals but alternative arrangement is being made and the department has asked the Government to allot Government owned buildings for creation of oxygen beds, if required.
He also said that under difficult circumstances, private hospitals can also be requisitioned under the Epidemic Act.
He also informed that WHO has come forward to assist the State with two make shift hospitals each in Dimapur and Kohima districts with oxygen supported beds.
On the availability of COVID-19 vaccines, Dr Medikhru said the State received 1 lakh doses of the vials on April 26 while the Centre is willing to give more vaccines.
He informed that registration process for vaccination of people in the age group of 18 to 44 has started but the vaccination will start only after the next consignment arrives.
Currently an estimated 8 lakh population are between 18 to 44 years of age in the State, while Government of India has asked the State to buy the vaccines, but the State Government has decided to provide free vaccines as far as possible, said Dr Medikhru.
State Immunization Officer, Dr Ritu Thurr said that the vaccination process in the State has improved, while the next consignment is likely to be received within the next two weeks.
Meanwhile, the Principal Director also informed that despite the State Government creating new posts of more than 300 healthcare workers, including doctors and nurses in 2020, the State is still facing acute shortage, specially doctors and nurses. He said as per WHO guidelines, the doctor to population ratio should be 1:1000 while Nagaland has 1:3000 ratio and there is also huge shortage of staff nurses.
The age group mostly being impacted by the second wave is between 20-30 years with 243 of them being infected between January to April 18, 2021, said State Nodal Officer Dr Nyanthung Kikon.
The age group positive cases since January to April 18, 2021 are: Below 10 years – 8, 10-20 years – 71, 20-30 – 248, 30-40 – 102, 40-50 – 62, 50-60 – 46, 60-70 – 24, 70-80 – 9 and 80-90 – 7.
On 13 deaths that occurred during the same period, Dr Kikon said there were no fatality till the age of 30 but one was in the 30-40 age group, 40-50 – 2, 50-60 – 5, 60-70 – 1, 70-80 – 3 and one in 80-90 age group. (Page News Service)