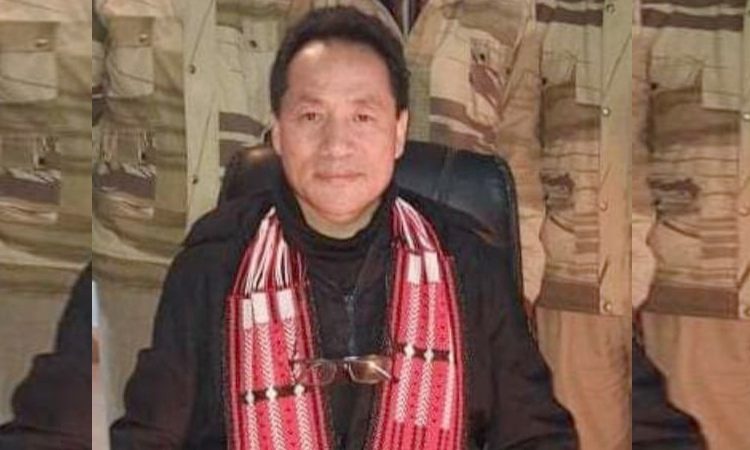 DIMAPUR, JULY 1: Member of Nagaland Legislative Assembly (NLA) and Advisor to Information & Public Relation, SCERT and Village Guards, Toshi Wungtung passed away early Thursday morning at BLK Hospital, New Delhi, where he was being treated for COVID-related health complications.
He was 57 and is survived by his wife Lipokla.

The first-time Legislator from 58 Shamator-Chessore Assembly Constituency was elected on NDPP ticket to the NLA on February 27, 2018.
An alumnus of Jawaharlal National University, Toshi Wungtung was already known for his activism in the State even before he joined State politics.
Among others, he was a member of the Forum for Naga Reconciliation and former General Secretary and Spokesperson of Eastern Nagaland People’s Organisation.
He was also part of a 6-member team of the Naga Hoho and ENPO delegated to meet the late SS Khaplang, Chairman of the NSCN (K), in Myanmar in early 2016.
State Funeral
Meanwhile, Principal Secretary for Home, Abhijit Sinha has informed that the mortal remains of the departed leader will reach Dimapur on July 2.
According to a DIPR bulletin, the mortal remains will be kept at his residence in Purana Bazaar, Dimapur, for people to pay their last respects from 4 p.m., following COVID-19 appropriate behaviour.
“The State Funeral of late Toshi Wungtung, which will be held the next day, on July 3, 2021, at his residence from 8 a.m. onwards, will be live-streamed on MyGov Nagaland Youtube, Facebook Channels and can be viewed online also”, it informed.
Governor, CM condole
Nagaland Governor RN Ravi has expressed shock and grief at the sudden demise of Toshi Wungtung, MLA & Advisor to the Government of Nagaland, today at BLK Hospital, Delhi while undergoing treatment.
“Late Shri Toshi Wungtung tirelessly and selflessly worked for the better future of the youth. He dedicated his life to building a peaceful and prosperous Nagaland. …In his demise, the country and the State has lost a promising and dynamic young leader”, he said.
The Governor, on behalf of the people of Nagaland, conveyed heartfelt condolences to the bereaved family and prayed to God to grant them solace at this hour of enormous pain.
Neiphiu Rio: Chief Minister Neiphiu Rio said he had personally known the departed leader from his young college days as they would frequently interact on issues related to the Naga people when the latter was scholar in Jawaharlal Nehru University.

“Ever since, we have had close ties and I have always considered him as a younger brother and a close advisor. He was an intellectual activist working with various organisations, civil societies and NGOs. He had a vast experience and close networks with all sections including international organisations. He was also closely associated to the Naga people and organisations in Myanmar and always made efforts on promoting humanitarian causes.
“He was a leader who stood for the masses and reflected the aspirations of the people. Naga society as a whole has lost a dynamic leader and a true son of the soil. It is also a personal loss for me. The vacuum created due to his demise will be difficult to fill. However, his legacy will continue to live on through the many lives he touched,” he said.
Rio conveyed condolence to the bereaved family.
(Page News Service)