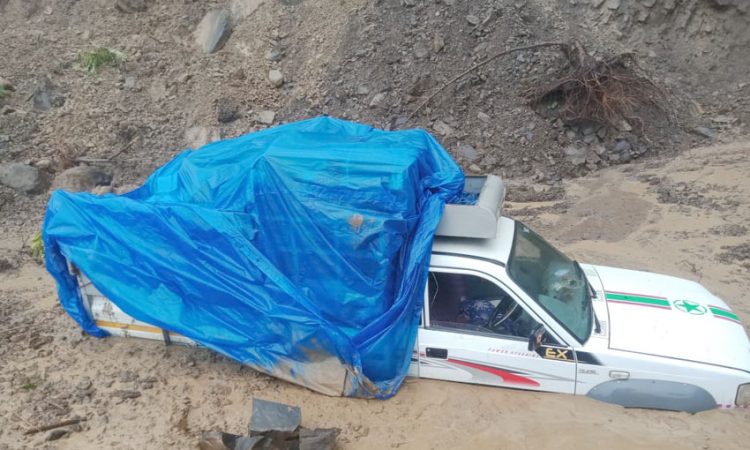 A pick-up vehicle stuck at a landslide in between Khomi-Pholami in Phek district on July 31, 2021.

KOHIMA, JULY 31: Torrential rain for a couple of days have triggered multiple landslides disrupting road connectivity to and fro Phek and at least five villages of the district.

Landslides have been reported along Phek village-Phek Town, Khomi-Pholami, Phek-Losami, Chozuba-Thuvopisu, Pfutsero-Lanye, official sources said.
A vehicle reportedly got stuck in the mudslide along Khomi-Pholami road, which was retrieved later however there is no human casualty from any corner, sources said.
Source said that there were blockages in at least three locations along Pfutsero-Khomi-Phek road while Madhucon Company deployed machineries to clear the road which is expected to be completed by tomorrow.
Meanwhile, SP, Phek, issued a travel advisory not to take Phek-Khomi-Pfutsero road due to landslides occurring at various places.

Pfutsero-Lanye-Phek road is also experiencing some landslides but have been cleared and motorable now, he said.
Travellers have been advised to be wary of rockslides, landslides and skids, which may be occur due to fresh cutting of the road. (Page News Service)