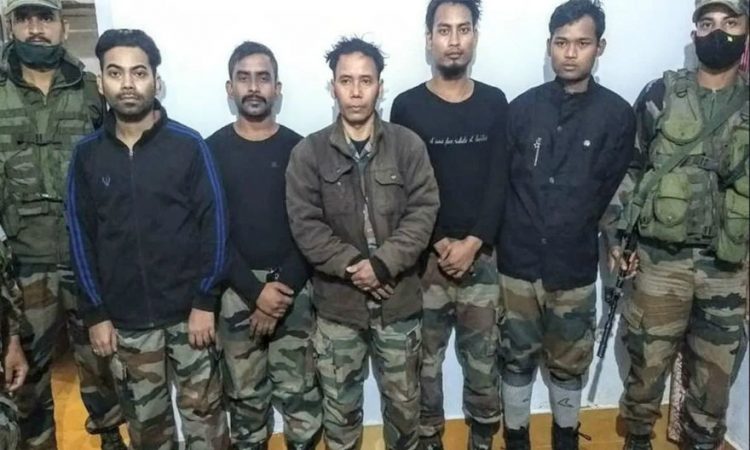 Shillong, November 12: Meghalaya Director General of Police R Chandranathan on Thursday said the insurgency in the state has come to an end with the surrender of banned ULFA (Independent) outfit’s second-in-command Dhrishti Rajkhowa.

Rajkhowa, a close confidant of ULFA (I)’s self- proclaimed ‘commander-in-chief’ Paresh Baruah, along with four other militants surrendered before the Army near the India- Bangladesh border in South Garo Hills district on Wednesday.
He was active in the Garo Hills region and had aided several other insurgent outfits.
“Rajkhowa’s surrender marks the end of two-decade-long armed conflict in the restive Garo Hills region in particular and Meghalaya in general,” the DGP told PTI.
“He was under tremendous pressure. It was just a matter of time before he surrendered. He was left with no other option but to give up arms,” the top police officer said.
Chandranathan said the militant had earlier narrowly escaped twice this year in encounters with the state police.
“We had missed him twice this year. In the latest encounter, one of his bodyguards was injured but he had escaped unhurt,” the police chief said.
There are five-six pending cases against Rajkhowa and the Meghalaya Police will pursue legally to get him for trial in the state, he said.
“We are bringing him here for the heinous crimes he had committed, including murder and extortion,” Chandranathan said.
Rajkhowa had contacted his wife in Assam and directed her to get the Army involved for his “safe” surrender as he did not trust the Meghalaya Police, a source told PTI.
While the Army was discreetly transporting Rajkhowa and his four other aides to Assam in civilian vehicles after their surrender, the Meghalaya Police stopped them in East Garo Hills district around 6 pm on Wednesday evening, he said.
“It is then that Rajkhowa reportedly told a senior police officer that he had earlier thought of surrendering but decided against it because every time he came across the police in Garo Hills, an exchange of fire would ensue,” the source said.
He admitted to having been present during the Bolbokgre encounter in Rongara area of South Garo Hills district two weeks ago and said Bangladesh was no longer a safe haven for him, the source said.
Born Manoj Rabha in Assam’s Goalpara district, 50- year-old Dhrishti Rajkhowa alias Bura Dada is believed to have personally trained several top insurgents in the Garo Hills region in jungle warfare, besides providing several militant outfits with arms and ammunition in exchange for money.
The Meghalaya government had formed a 10 company- strong counter-insurgency force, Special Force (SF) 10, in 2014 to fight the militants. Since then, it has neutralised several top insurgents in the region, including Garo National Liberation Army (GNLA)’s self-proclaimed ‘commander-in-chief’ Sohan D Shira in February, 2018.
Rajkhowa had narrowly escaped death during Shira’s encounter as he had gone to a stream for a bath, the ULFA (I) militant told the Meghalaya Police on Wednesday evening, as per the source.

He, along with four other ULFA (I) militants, surrendered before an Army team from Assam at Dilsengre village near the India-Bangladesh border and laid down an AK- 81 assault rifle, two 9 mm pistols and 107 cartridges.
Of late, militancy in Meghalaya was largely concentrated in the Garo Hills region. However, many GNLA insurgents have laid down arms following the deployment of SF-10 commandos in the region.
Other militant outfits like ANVC, ANVC-B and the UALA have signed a peace agreement with the Meghalaya government, while Khasi Hills-based group HNLC, with a cadre strength of less than 20, is considered largely inactive and has not been involved in subversive activities for many years, sources said. (PTI)