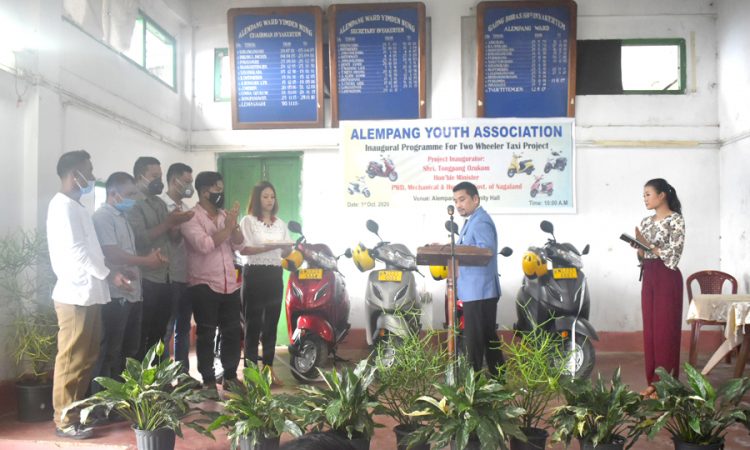 Dimapur, October 1: With a vision to promote financial independence and self reliability amongst the youth, Tongpang Ozukum, Minister for PWD ,Mechanical and Housing, flagged off a two wheeler taxi project at Alempang Community hall, Mokokchung on October 1.
Speaking at the inaugural program, which is the first of its kind in Mokokchung district, the minister asked the Alempang Youth Association (AYA), under whose organization the project was handed over, to set a standard par excellence while providing service to the public and be the inspiration for other youths in the district towards self employment and financial independence.
He also said that the project was the need of the hour not only for curbing the ever growing traffic problems but also from economical point of view.
Encouraging the youths to be self reliant and contribute for the betterment of the society, the minister said that along with the rest of the world our state is also reeling under financial crisis due to COVID-19 as every activities has been put to a temporary halt. He further added that the new normal will be to become productive and self reliant; to adapt and survive with the impact the COVID-19 pandemic has brought to everyone across the globe.
“There is no shame and substitute for hard work and in these trying days it has become a world for the survival of the fittest. We cannot wholly depend on government jobs alone but seek out for other avenues through skill development and other productive activities like farming”, he also added.
The minister also said that the state government is doing its best by taking all austerity measures and asked the citizens to do their part by contributing for the society as a whole.
According to a press release issued by Press Secretary of the Minister, Limawabang Jamir, Deputy Commissioner, Mokokchung while lauding the AYA for the noble venture asked the members to continue motivating the youths to be self productive by encouraging them to develop and enhance their latent skills for financial independence. He also assured them his full co operation in their venture while reminding them to follow the traffic rules and other regulations as laid down by the competent district authorities.
Earlier, the program was chaired by Bendangrenla, Information & publicity secretary, AYA, Bendangtoshi, president AYA, delivered the welcome address. Lemasashi, Chairman, Alempang ward executive delivered a word of appreciation on behalf of the citizen and Rev. Temsu S, pastor ABA pronounced the dedicatory prayer.
(Page News Service)