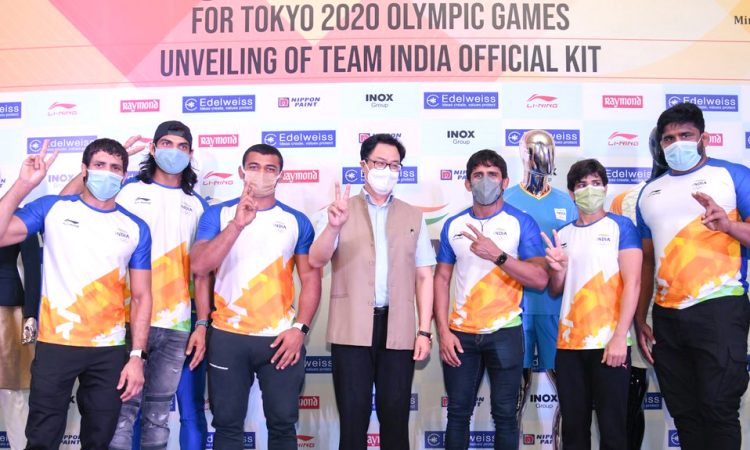 NEW DELHI, June 9: Kiren Rijiju, the Union Minister for Youth Affairs and Sports, on Wednesday, said that the Indian Olympic-bound contingent will not sport any branded apparel during the upcoming Olympics.

He also said that only India will be written on athletes’ kits at the Tokyo Olympics, which is all set to begin from July 23.
“Indian athletes, coaches and support staff, will not be wearing any branded apparel at Tokyo Olympics. Only ‘INDIA’ will be written in the kits of our athletes,” tweeted Rijiju.
Earlier, the Indian Olympic Association(IOA) and Sunlight Sports (Brand Li Ning) reached an agreement together to arrange the sports kitting of the Indian Olympic team to Tokyo 2020, locally by IOA.
The agreement was reached keeping in mind the safety and convenience of the athletes, in lieu of the logistical challenges being faced by IOA due to the ongoing COVID-19 lockdown situation in the country.
“Over 100 Indian athletes have qualified for the Tokyo 2020 Olympic Games. The athletes are based in various states and cities of India in training camps — some of which are isolated bubbles, in preparation for the upcoming Olympic Games,” an official release stated.
With the vastly spread-out training camps combined with the constantly evolving COVID-19 situation in India, IOA has faced unprecedented logistical challenges in meeting the exact apparel requirements of the participating Indian athletes. Due to these challenges, the Indian Olympic Association has requested Sunlight Sports to allow IOA to appoint local manufacturers familiar with the athletes’ apparel measurements, to produce and supply the sports kitting for the Indian Olympic team.

The IOA on Tuesday had decided that the nation’s athletes would wear unbranded sports apparel in the Olympic Games to be held in Tokyo from July 23 to August 8, 2021. (ANI)