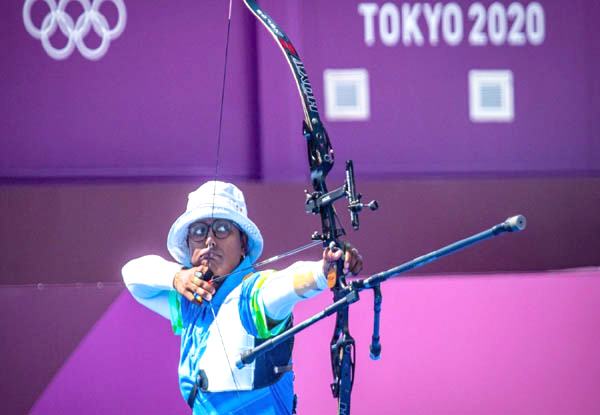 TOKYO, July 30: Another Olympics, another heartbreak for India’s Deepika Kumari.
The world number one archer’s quest for an Olympic medal ended in heartbreak for the third time as she surrendered tamely to Korean top seed An San in straight sets in the quarterfinals here on Friday.

It was all over in six minutes.
The fancied Indian misfired three 7s in a row after drilling in as many 10s in succession to snuff out any chance of a comeback after being 0-2 down in the opening set.
An, who had a perfect opening set of 30, closed it out despite shooting in the red-circle thrice in succession (7-8-9) in second and third sets.
“I am not sure what happened. I tried hard but I could not perform to my own expectations,” Deepika, who shot a pathetic four 7s from seven arrows, said after her loss at the Yumenoshima Park.
“I feel very sad, because I did well in the last two World Cups. I had high expectations but I could not start off well,” she admitted.
“It was not a hard match at all, but I could not perform to my potential and she had it easy,” Deepika, who lost to her in straight sets in the final of the Tokyo Test Event here two years ago, said.
Deepika’s husband Atanu Das is the only Indian left in medal contention after his stunning shoot-off victory over two-time Olympic champion Oh Jin Hyek.
In his last-16 match slated on Saturday, Das will face home favourite Takaharu Furukawa, an individual silver medallist at the 2012 Olympics and a team bronze winner here.
Barring her three 10s on the trot in the opening set, there was no exceptional shooting from An, who had broken a 25-year-old Olympic record in the ranking round en route to winning two gold medals (team and mixed) in these Games.
But it was all about her Korean ‘heavyweight tag’ that proved to be the undoing for Deepika who came in as world number one after winning five World Cup gold medals this year.
“Rankings don’t matter much in the Olympics. It happens once in four years and one bad match can cost you a medal. Every match is like a final here.”
Deepika, however, said she would keep striving for an Olympic medal.
“As I’m getting old, it’s getting tougher for me every day now. But archery does not stop for me. It’s the only thing I do well. So I will keep trying every time.”
In the 2016 Rio Olympics, she had lost in the pre-quarterfinals, while at her maiden Olympics in London, where also she had gone as a number one ranked player, she had crashed out in the opening round.
In her last-16 match, Deepika held her nerves to pip 2017 world champion Ksenia Perova of the Russian Olympic Committee in a thrilling one-arrow shoot-off and sealed a 6-5 (10-7) win.
Locked 5-5 after the regulation five-setter, the 27-year-old Indian delivered a perfect 10, hitting the bull’s eye, to topple the team silver medallist at the 2016 Rio Olympics.
Call it a stroke of luck or something else for Deepika but Perova misfired a 7 to start off the one-arrow shoot-off and the Indian held her nerves to seal the issue by hitting the bull’s eye.
Returning to action in the afternoon session, Deepika started off with a loose arrow (7) as An showed exceptional shooting first up and drilled in all three 10s to cruise to a 2-0 lead (30-27).

Deepika followed the 7 with three 10s in a row, only to misfire again, picking three 7s. (PTI)