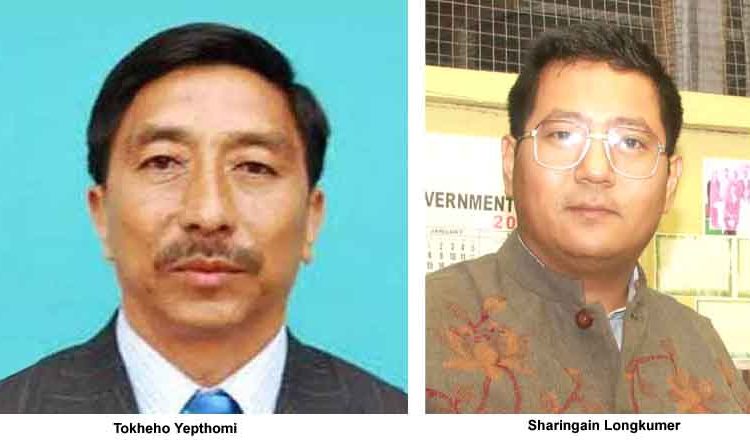 Kohima, May 23: Ruling Nationalist Democratic Progressive Party (NDPP) Thursday swept both the Parliamentary election and bye-election to Aonglenden constituency in Nagaland.
NDPP candidates Tokheho Yepthomi and Sharingain Longkumer, both consensus candidate of People’s Democratic Alliance (PDA) comprising BJP, JD(U) and Independent MLAs, won the Lok Sabha and 26-Aonglenden assembly constituency seats respectively, said Returning Officer, M Patton while briefing media in his conference hall here tonight.
For the Lok Sabha seat, Yepthomi won by 16344 votes. He polled 5,00,510 votes while Chishi got 4,84,166.
NPP’s Hayithung Tungoe got 14,997 votes and Independent Dr. M. M. Thromwa Konyak 4620 votes while 2063 electorates voted for NOTA.
The verdict is the lowest winning margin ever in the State as in the past the margin used to be in terms of lakhs of votes.
Interesting to note is that in the initial stages of counting Tokheho was leading with around 25,000 votes but Chishi started taking the lead from around 1 pm with 6,632 votes and went up to 33,000.
The turnaround came at around 6 pm with barely little over 50,000 vote count left. Yepthomi came from behind to take a meager lead of 166 votes and finally ended winning the seat for the second term.
In the 26-Aonglenden assembly constituency under Mokokchung district, ruling NDPP nominee Sharingain Longkumer became the new elected representative.
Sharingain won the seat by a margin of 6245 votes polling 8,607 votes while Congress candidate Alemjongshi got 2362 votes.
The bye-poll, which was necessitated following the demise of sitting ruling MLA Imtikumzuk in September last year, was held simultaneously along with the first phase of Lok Sabha poll on April 11 last.
Aonglenden A/C has a total of 12,436 electorates including 6146 male and 6290 female voters and it had recorded an approximate 84.3% turnout which stood at 10,589 votes polled.
With Longkumer’s win, strength of the political parties in the State Assembly is NDPP – 20, BJP – 12, JD(U) – 1 and Independent – 1 while Opposition NPF has 26 MLAs.
Longkumer is a first timer in the State politics.
Counting of votes was taken up from 8 am today.
Nagaland Chief Electoral Officer (CEO), Abhijit Sinha AND Additional CEO, N Moa and were also present during the briefing. (Page News Service)