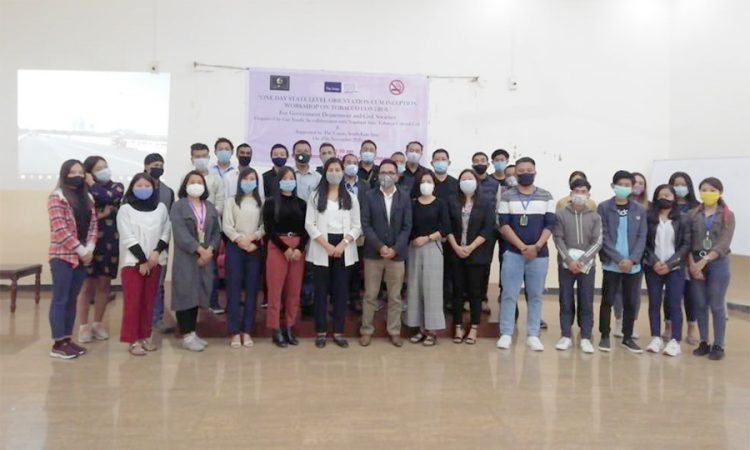 In his opening remarks during a workshop on tobacco control organized by Can Youth, in collaboration with Nagaland State Tobacco Control Cell, supported by The Unions, South-East Asia, Dr Singh stressed on enforcing laws on the use of tobacco and not to sell products containing tobacco. He said people are suffering directly or indirectly due to tobacco use, therefore, organizations and all Departments should start creating awareness on tobacco control.
He encouraged Government Departments, civil societies and all other Departments to implement tobacco awareness in both the district and state levels, as it is an issue that involves everyone. He also asked the youths to be involved in strengthening all important aspects.
Talking about how to stop and confront the intake of tobacco, Dr Singh said, “We should not allow new individuals to start taking tobacco by sharing awareness and help those who are consumers already to quit it before it is too late.”
He encouraged medical officers and counselors to start initiating awareness especially for tobacco users to quit it. He ended his remarks by saying, “Only you and I can stop the use of tobacco, and said this pandemic is a good chance to start.”
Special Guest, Kilentula Jamir, Child Consultant and Board Member, Can Youth, talked about the harmful effects of tobacco by sharing her own father’s story, who is undergoing Chemo therapy. She said that it is not easy to save oneself from addiction if one does not have the will.
She said that there is no significance of becoming a successful big shot if we were to give ourselves to tobacco and become an addict.
She appealed to all Departments, organizations and all individuals to start acting on the concerned problem and start initiating to stop the addiction and save lives, especially children and adults who are obliged to be the future of our society.
She ended her speech by quoting Mark Twain “The secret of getting ahead is getting started” to get started on preventing tobacco addiction.
Dr. Meribeni Odyuo, Deputy Director, Dental and SPO, NOHP Directorate of Health & Family Welfare, Kohima, Nagaland, gave a power point presentation on the topic ‘Tobacco epidemic and the burden of its use in our society’ wherein she presented different forms of tobacco products that tobacco industries present to impress new users, the facts about tobacco and number of tobacco users in Nagaland and India.
She underscored that every 6 seconds, someone dies from tobacco use, and tobacco is a risk factor for 6 out of the 8 top causes of mortality.
Presenting facts about tobacco, she said that mouth cancer is the most common among men followed by lung cancer. Tobacco related cancer deaths accounts for 42% male and 18% female, and has killed more people than TB, accidents, suicides, AIDS and Malaria combined.
She said that tobacco affects everyone not only the users, one third of the people are regularly exposed to second hand smoke and about 6 lakhs people die every day prematurely as a result of exposure to second hand smoke.
In a survey shown by Global Adult Tobacco Survey North East India, Nagaland ranks 2nd with 56.8% consumption rate behind Mizoram including children, adult and old age consuming tobacco.
In order to built a tobacco-free scenario, she said, “We should hold hands for the solution to the global tobacco epidemic, and the cure for this epidemic is dependent not only on medicines and vaccines but on the concentrated efforts and actions of both Government and civil societies to move forward by creating intensive awareness strategy, effective enforcement and positive activist or role model.”
Dr. Chiekroshuyi Tetseo spoke on the evolution of Tobacco Control Laws in India which dates to 1975, when the Cigarettes (Regulation of Production, Supply, and Distribution) Act, 1975. He also talked about Framework Convention on Tobacco Control (FCTC) which became the first international treaty under the auspices of WHO.
He explained about topics, measures and articles from Sections of FCTC that displayed statutory health warnings on bans of advertisements, cartons, and cigarette packages, research on tobacco and information sharing, restriction of selling tobaccos to minors, and awareness about tobacco use and passive smoking.
He also highlighted COPTA Act 2003 and its Sections, where the objective of the Act is to protect children and non-smokers from tobaccos and smokers from effect of secondhand smoke. He also mentioned about the role played by the stakeholders for the measures to be taken in reduction of demand and supply and protection of Health and Environment.
Jenpu Rongmei, Founder and Chief Functionary, Can Youth, delivered the closing remarks where he stated that the use of tobacco is hampering the next generation of our society, and said that the problem of tobacco is not only with health but also draining the economic growth of the family.

He appealed and encouraged the Departments, NGOs and all individuals to contribute collectively and put the effort to minimize and overcome this issue.
The workshop session concluded with vote of thanks by Sentiwati, Project Coordinator, Development 4 Adolescent, Can Youth, by thanking all the resource persons, invitees and participants for their support and cooperation in availing their time and contributing to the programme.
(Page News Service)