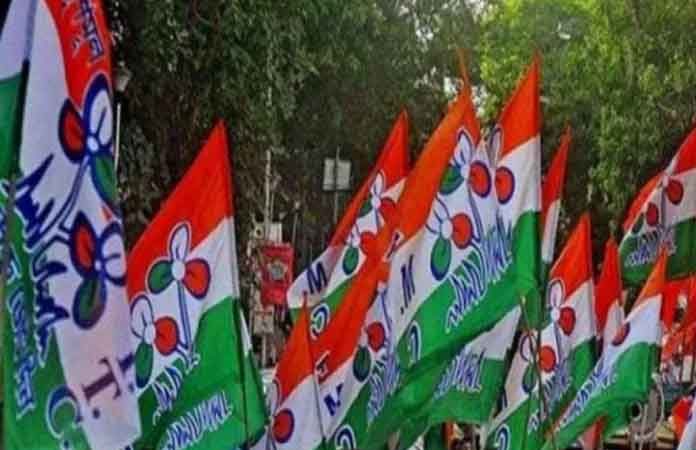 Kolkata, May 17: Angry retorts by TMC leaders and violent protests by party supporters became commonplace in West Bengal on Monday, after two state ministers among others were held in the Narada case, with Chief Minister Mamata Banerjee “seeking her arrest” when asked to leave the CBI office here, officials said.

Chaos ensued outside the probe agency’s office at Nizam Place, as hundreds of party supporters defied the ongoing lockdown, raising slogans against the BJP-led NDA government, hurling stones and bricks at security personnel in protest against the arrests.
The agitators also burnt tyres and blocked roads in several other parts of the state, including Hooghly, North 24 Parganas and South 24 Parganas districts.
The CBI on Monday morning arrested state ministers Firhad Hakim, Subrata Mukherjee, TMC MLA Madan Mitra as well as former minister Sovan Chatterjee in connection with the Narada sting case in which politicians were purportedly caught taking money on camera.
Banerjee, who arrived at the CBI office around 11 am, “told our officers that they have to arrest her if they want her to leave Nizam Palace,” sources in the central probe agency said.
The sources said Banerjee’s actions are akin to interference in the probe handed over to the agency by the Calcutta High Court.
Apart from the CM, Chatterjee’s estranged wife Ratna, who is now an MLA from Behala Purba, Hakim’s daughter and other senior leaders of the Trinamool Congress also reached the CBI office.
Reacting to the arrests, TMC spokesman Kunal Ghosh claimed that the CBI action was a vengeful act and a fallout of the BJP’s loss in the West Bengal assembly elections.
“The BJP is still not able to accept defeat in the polls after having made an all-out attempt to win… This is a reprehensible act.
“When the state is fighting the Covid situation, they are trying to create disturbances in such a manner,” he said.
The ruling party MP Sougata Roy said this was a “vengeful and vindictive” decision by the central government.
“The CBI action is politically motivated,” said TMC MLA Tapas Roy.
West Bengal Assembly Speaker Biman Banerjee dubbed the arrests as illegal, contending that the CBI move on the basis of the governor’s sanction was unlawful.
“I have not received any letter from the CBI nor has anybody sought any permission from me as per the protocol,” he said.
Governor Jagdeep Dhankhar had recently granted sanction to prosecute all the four leaders, following which the probe agency finalised its charge-sheet and moved to arrest them.
“I do not know for what unknown reason they went to the governor and sought his sanction. The chair of the speaker was not vacant at that time, I was very much in office.
“This sanction is absolutely illegal and arresting anyone on the basis of this sanction is also illegal,” Banerjee claimed.
Taking note of the widespread protests across the state, Dhankhar urged the CM to contain the “explosive situation” and asked her to weigh the “repercussions of such lawlessness and failure of constitutional mechanism”.
Another senior TMC leader Abhishek Banerjee urged party workers to follow the law and refrain from violating the lockdown norms.
Commenting on the arrests, Bishwajit Bhattacharyya, former Additional Solicitor General of India, said one could impute a malafide motive other than legal to the development.
“While not going into the technicalities, one would assume that a minister in a state government would obviously present himself for any questioning by the arms of law.
“Since this is a four-year-old case with the evidence on tape, there is no question of tampering with it. Under those circumstances and given the Supreme Court observations on arrests, one fails to understand why these ministers are being arrested,” Bhattacharyya said.

Senior advocate Arunava Ghosh told PTI the Assembly Speaker has no authority to sanction arrests under the Prevention of Corruption Act.
Hakim, Mukherjee and Mitra were re-elected as MLAs in the recently concluded West Bengal assembly polls, while Chatterjee, who left the TMC to join the BJP, has severed links with both parties.
The Narada tapes were made public just before the 2016 assembly elections in the state. (PTI)

CBI court grants bail to 4 leaders arrested in Narada case
Kolkata, May 17: A special CBI court on Monday granted bail to two West Bengal ministers, a TMC MLA and a former minister arrested in connection with the Narada sting tape case, their lawyer said.
Special CBI court judge Anupam Mukherjee granted bail to senior ministers Subrata Mukherjee and Firhad Hakim, Trinamool Congress MLA Madan Mitra and former minister Sovan Chatterjee after hearing their lawyers and the counsel for the agency, lawyer Anindya Raut said.
They were produced before the court through the virtual mode.
The four were kept at the CBI office in Nizam Palace following their arrest in the morning from their homes in different parts of Kolkata. (PTI)