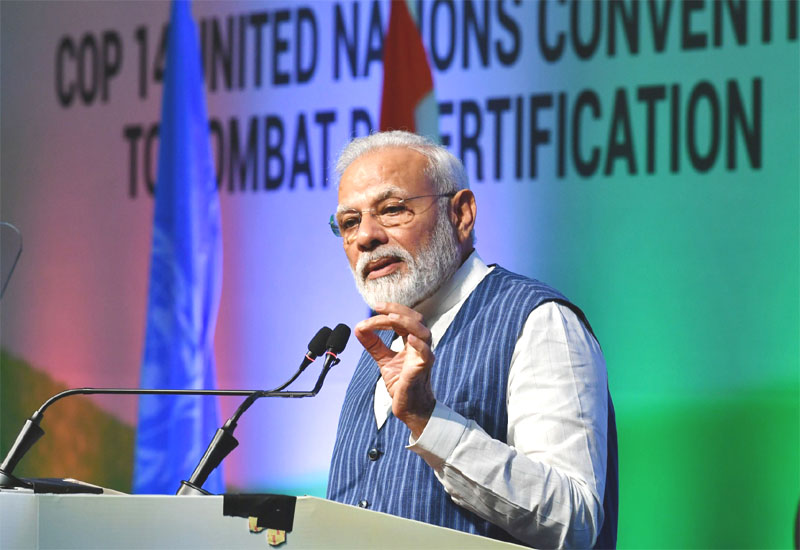 New Delhi, September 10: It’s time the world said goodbye to single-use plastic, Prime Minister Narendra Modi said on Monday.
Addressing delegates from nearly 200 countries at the high-level segment of the 14th conference of parties to United Nations Convention to Combat Desertification (UNCCD), he said India would put an end an to its use in the coming years.

The Prime Minister further said his government has put an end to single-use of plastic and also called for a global boycott of single-use plastic.
“I think the time has come for the world to say goodbye to single-use plastic”, said Modi as the hall resonated with claps.
Modi said, “For India, the earth is scared”.
“Another form of land degradation, which if not prevented, would become impossible to reverse. This is the menace of plastic waste. Apart from having adverse health implications, this is going to render land unproductive and unfit for agriculture.
“My government has announced that India will put an end to single-use plastic in the coming years. I believe time has come for even the world to say goodbye to single-use plastic,” Modi said.
Modi also announced that India would raise its ambition of the total area to be restored from land degradation status — from 21 million hectares to 26 million hectares between now and 2030.
The prime minister also said that India would take pride in using remote sensing and space technology for multiple applications, including land restoration.
“I am happy to state that India would be happy to help other friendly countries develop land restoration strategies through cost-effective satellite and space technology,” Modi said.
Earlier in his address at the global event, Modi said climate and environment impact both biodiversity and land. “It is widely accepted that the world is facing a negative impact of climate change leading to land degradation be it due to rise in sea-levels and wave action, erratic rainfall and storms, and sand storms caused by hot temperatures,” he said.
Speaking on the issue of water scarcity, PM Modi said augmenting water supply, enhancing water recharge, slowing down water run-off and retaining moisture in the soil are all parts of a holistic land and water strategy.
The Prime Minister further called upon the leadership of UNCCD to conceive a global water action agenda which is central to the Land Degradation Neutrality strategy.
Further on, he said that India has been able to increase its tree cover. Between 2015 to 2017, India’s tree and forest cover has increased by 0.8 million hectares, the PM said.
“I am happy to share that only last week, funds amounting to nearly six billion US dollars have been released to the provincial governments in lieu of such diversion for development of forest lands,” PM Modi said at the UN climate meet.
Modi said his government has launched a program to double the income of farmers by increasing crop yield through various measures which also includes land restoration and micro-irrigation.
“We are working with a motto of per drop more crop. At the same time, we are also focusing on Zero budget natural farming,” the Prime Minister said.
Speaking on the issue of water management, Prime Minister Modi said his government has created the “Jal Shakti Ministry” to address all water-related important issues in totality.
Speaking on the Swachh Bharat Mission, PM Modi said people from all walks of life have taken part in the movement and ensured that sanitation coverage was up from 38 per cent in 2014 to 99 per cent today.
Union Environment Minister Prakash Javadekar was also part of the summit.
United Nations Convention to Combat Desertification (UNCCD) was adopted in Paris on June 17, 1994, and was ratified by 196 countries and the European Union. India ratified the UNCCD Convention in 1996.
The event taking place in Greater Noida from September 2 to 13, will have over 6,000 participants from 196 countries, who will identify mutually viable solutions to the growing challenges of desertification, land degradation, and drought.
Ministers from nearly 80 countries, scientists, representatives of national and local government, NGOs, organisations and global youth networks will share their experience and expertise in tackling land degradation.
Desertification is a type of land degradation in which a relatively dry area of land becomes a desert, typically losing its bodies of water as well as vegetation and wildlife.
It is caused by a variety of factors such as climate change and over-exploitation of soil through human activity. (PTI/Agencies)

Nagaland to double farmers’ income by 2022

Anti-CAA protest at Dimapur on Jan 18