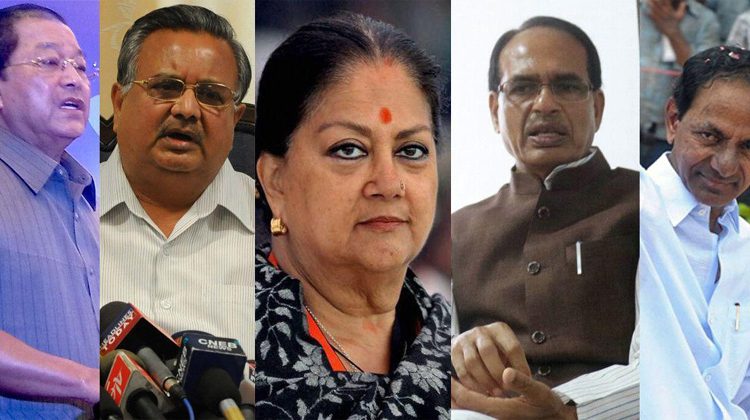 New Delhi, December 7: Exit polls Friday predicted a tight finish between the BJP and the Congress in Madhya Pradesh and Chhattisgarh, and a win for the opposition party in Rajasthan.
They also predicted that the ruling Telangana Rashtra Samithi in Telangana will retain power.
Madhya Pradesh, Chhattisgarh and Rajasthan are all ruled by the BJP presently.
While Republic TV-Jan Ki Baat gave 108-128 seats to the BJP and 95-115 to the Congress in the 230-member Madhya Pradesh, India Today-Axis said the saffron party could win 102-120 seats as against 104-122 for the Congress.
However, the Times Now-CNX exit poll predicted a majority for the BJP in MP with 126 seats and gave the Congress a tally of 89 seats.
On the other hand, ABP News exit poll said the Congress is likely to get a majority by bagging 126 seats. The BJP, it added, would get 94 seats.
In the 90-member Chhattisgarh assembly, exit polls broadcast by Republic-C Voter predicted 35-43 seats for the BJP and 4-50 for the Congress while the News Nation forecast a close race with 38-42 seats for the BJP and 40-44 for the Congress.
Times Now-CNX, however, gave a simple majority to the BJP in Chhattisgarh, saying it may win 46 seats while the opposition Congress may bag 35 seats. ABP News said the BJP may get up to 52 seats against 35 of the Congress.
However, India Today-Axis predicted the Congress is set to end Chief Minister Raman Singh’s 15-year old reign by winning anywhere between 55-65 seats. The BJP, it said, may be reduced to 21-31 seats.
All the exit polls said the alliance of former chief minister Ajit Jogi’s Janta Congress Chhattisgarh (Jogi) and the BSP may win between three and eight seats, which may help him to emerge as a king-maker in the event of a hung house.
If exit polls differed in their projections for Madhya Pradesh and Chhattisgarh, most of them predicted the Congress’ return to power in Rajasthan.
India Today-Axis said the opposition party may win 119-141 out of 199 seats for which elections were held. The BJP, it added, may win 55-72 seats.
Times Now-CNX forecast 105 seats for the Congress and 85 for the BJP.
However, Republic TV-Jan Ki Baat forecast a tighter race between the two parties. It gave the Congress and the BJP 81-101 and 83-103 seats respectively.
Exit polls were almost unanimous in predicting that TRS president and Chief Minister K Chandrashekar Rao’s gamble of advancing the assembly polls will pay off and he will retain power.
Republic TV and Times Now forecast that his party will 50-65 and 66 seats in the 119-member assembly.
TV9 Telugu and India Today forecast a tally between 75-85 and 75-91 for the ruling party respectively.
Some exit polls saw a tighter battle between the TRS and the Congress-TDP combine.
Exit polls by CVoter – Republic TV and CNX – Times Now predict a hung house in Mizoram, the last bastion of the Congress in the north east, with an advantage for the opposition Mizo National Front. Mizoram has 40 seats and a simple majority is at 21.
The counting of votes for five states, including Mizoram besides the four states, will be take place on December 11.(PTI)