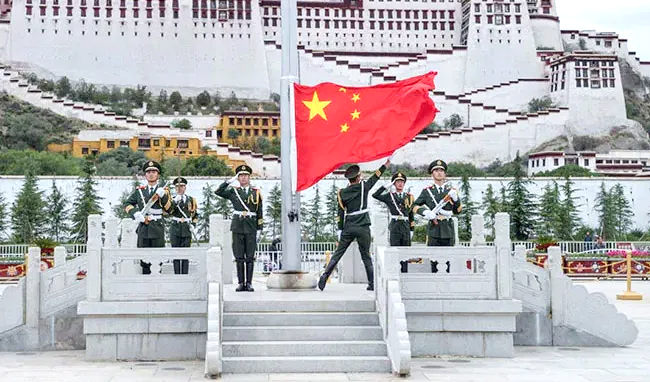 BEIJING, SEPTEMBER 5: China is planning a more than 1 trillion yuan ($146 billion) push to accelerate infrastructure investment in Tibet, including new and previously announced projects, three sources familiar with the matter said.
The renewed push to step-up development of the remote and impoverished southwestern region signals Beijing’s intent to bolster frontier security amid heightened border tensions with India in recent months, two of the sources said.
Last week, during a senior Communist Party meeting on Tibet’s future governance, President Xi Jinping lauded achievements and praised frontline officials but said more efforts were needed to enrich, rejuvenate and strengthen unity in the region.
He said a number of major infrastructure projects and public facilities would be completed, including the Sichuan-Tibet Railway, according to remarks published by the official Xinhua news agency.
The construction plans include completion of the challenging middle section of a high-elevation Sichuan-Tibet railway link, a railway line between Nepal and Tibet that has remained in the planning stages, and a newly planned dry port in the Tibet Autonomous Region, the sources said.
The sources declined to be identified because they were not authorised to speak with the media.
It was not immediately clear how much of the targeted spending is new, or over how many years it would be invested.
China’s State Council Information Office and the Tibet regional government did not immediately respond to requests for comment.
Construction on the most difficult section of the Sichuan-Tibet railway ~ linking Chengdu with Lhasa ~ will begin in coming weeks, said two of the sources.
The 270 billion yuan section of the railway has been known for construction challenges posed by rough terrain and complex geology, notably the segment linking Sichuan’s Ya’an city with Nyingchi in southeastern Tibet near the border with India.
Beijing also wants to push ahead with the Tibet-Nepal Railway linking Kathmandu with Shigatse, the 2nd-largest city in Tibet, which was among a number of bilateral deals signed in 2018 between Nepal and China. (Agencies)